They testified so that the truth would be known: in 2013, indigenous women resolutely recounted their personal stories in the genocide trial against ex-dictator Ríos Montt. They told of rapes and crimes against humanity. Their courageous testimony paved the way for Guatemala’s first successful prosecution for genocide. The judgment was repealed soon after, but it was a historical achievement nonetheless. 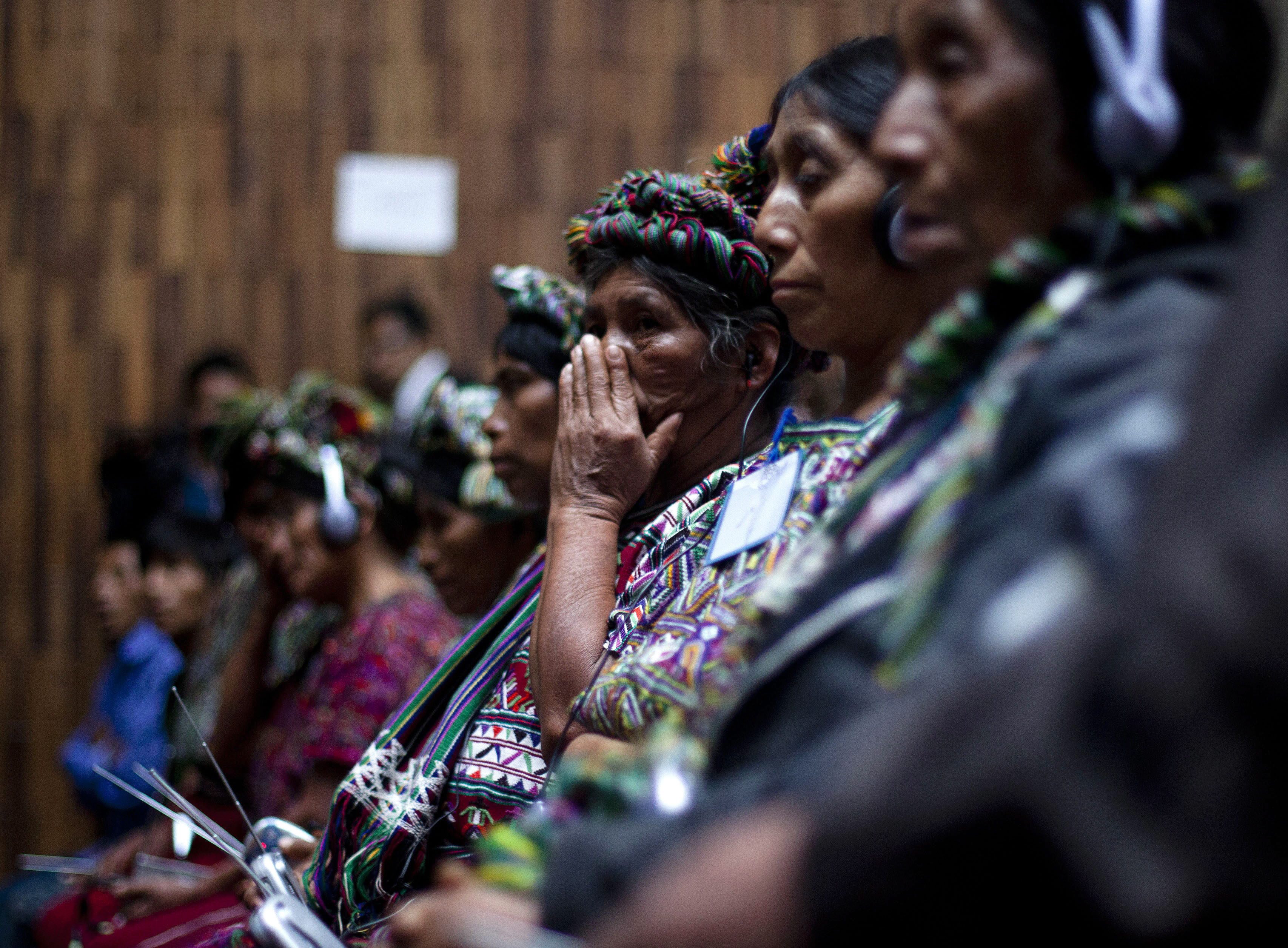 picture-alliance/dpa Women from the Ixil people attend the hearings on the trial against former dictator Ríos Montt in Guatemala City in March 2013.

Last year, in summer, a trial ended with a verdict that few Guatemalans had believed possible: ex-dictator José Efraín Ríos Montt was found guilty and sentenced to 80 years in prison for genocide against the Ixil Maya and crimes against humanity.

According to UN estimates, around 200,000 people died in Guatemala in 36 years of civil war from 1960 to 1996. Most of the massacres of civilians occurred in the 18 months following the coup d’état that brought General Montt to power in 1982. The 2013 verdict was the first acknowledgement by the state that an act of genocide was committed. It was also the first time a former Latin American head of state was convicted of genocide by a court in his own country. The testimonies of the victims who recounted their memories of the atrocities in court, were crucial in this historic ruling. Dozens of Ixil Maya undertook long journeys to give evidence. The women’s reports of rape and sexual violence, in particular, captured a great deal of attention: after years of silence, they brought a taboo subject out into the open.


The long road to the witness box

A Truth Commission report was published in 1999: “Memoria del silencio” (Memory of Silence). It mentions six kinds of human rights violations committed during the civil war, including systematic rape of women and girls, which was mostly committed by the military.

The victims’ lives are still marred by the consequences today. Many women who were raped were ostracised by the village community, had unwanted pregnancies or became ill. Others, fearing hostility, kept quiet about their experiences and endured the shame and suffering alone. For years, the victims were pressured into remaining silent. In recent years, however, they found strength in numbers and called for the crimes to be prosecuted. One of the groups that spearheaded the campaign to address the issue of sexual violence was the collective Actoras de Cambio. It was established in 2004 by a group of women seeking to heal the wounds of war and bring peace. They wanted to break the silence surrounding the systematic sexual abuse of women during the war. Moreover, they wanted to help victims to cope with their past.

Actoras de Cambio cooperated closely with female Mayan leaders, healing psychological wounds and helping victims to take their fate into their own hands once more. They used methods from the Mayan cosmovision and energetic psychotherapy as well as kinesiotherapy, art therapy and breathing exercises. The feminist approach helped women to see how they were alienated from their own sexuality by the appropriation of their body by others.

Liduvina Méndez of Actoras de Cambio says that “victims need to identify the reasons for the crime and understand that they are part of the shared history of their society – that their rape is not an isolated personal experience.” Actoras de Cambio finally succeeded in bringing the taboo subject into the public eye. Five years after the initiative’s foundation, the women ventured into the public spotlight for the first time. “Even if we are afraid, we are now ready to talk to society about this issue,” they said. An event was organised with government representatives in the capital and numerous regional festivals were staged under the banner “I am the voice of memory and the body of liberty”.

Doing so takes incredible courage, Liduvina Méndez says. Women must stand up in public in their communities and discuss sexual abuse. More and more women and girls are finding the courage to join them. This is all the more important as many women still suffer many forms of violence even today (see box).


No peace without memory

In public discourse in Guatemala, peace is often a synonym for “oblivion”. The truth cannot be disguised however. Justice must be done, and the women concerned want state institutions to accept responsibility for the crimes – and guarantee that they will not happen again. “We want no forgiveness, no forgetting and no reconciliation, because that would mean denying reality,” says Dulce Cabrera, an activist with HIJOS, an organisation formed by the children of people who disappeared. “Peace can only be built on justice. So crimes against humanity or genocide need to be prosecuted by the courts. We need to find out what happened to the disappeared so that the victims’ dignity can be restored. The truth must no longer be concealed; institutions need to change.”

In recent years, Guatemala has seen the emergence of a number of initiatives denouncing machismo, racism and elitism in society. A growing number of women are involved in community radio. Others use social networks or newspapers’ opinion columns to express their views. They tackle taboo subjects and make women visible as political actors and citizens with rights. Norma Chamalé, a Maya woman working for the Independent Media Centre (Centro de Medios Independientes, CMI), says: “We publish the memories of women from areas where the resistance was strongest. We report on their active participation and thus help to refute stereotypes. We reconstruct reality by taking into account the historical background.”

In search of justice

Finally, the fact that the genocide trial took place at all – marking a major milestone for both the women and the country – was due crucially to the efforts of one woman. Without the investigations led by Attorney General Claudia Paz y Paz Bailley, the first Pwoman to ever head the public prosecutor’s office, no prosecution could have been brought. The magazines Newsweek and Forbes both called Paz y Paz Bailley “one of the most valiant women in the world”. Plataforma 51 Guatemala, an online forum against gender-based violence, called her the “Prosecutor of Dignity”.

On 10 May 2013, the criminal court in Guatemala City headed by Justice Jazmín Barrios convicted General Ríos Montt and his former chief of intelligence. The verdict confirmed not just the genocide but also the fact that, under Ríos Montt’s command, “women of the Ixil Maya ethnic group were subjected to individual and collective sexual abuse”. This was a historical moment, even thought the judgment was repealed because of formal flaws shortly after.

“The ruling revealed a historical truth. Despite its annulment it is of lasting importance, because a great amount of survivors of massacred families have been heard in public,” states Libertad Rian, a 25-year old feminist from the Q’eqchi’ Maya. “Their testimony and the courts’ investigations finally provided evidence: yes, there was a genocide, and there were violations of women during the armed conflict!” A trial that deals with the burning of the Spanish embassy in 1980 has started recently. The fire killed 37 people, most of them were indigenous farmers. The father of Nobel Peace Prize winner Rigoberta Menchú Tum was among them. Menchú Tum has fought vigorously for justice in this matter and is now a plaintiff.

In another court, proceedings are underway against an army colonel and a former military commissioner accused of being responsible of the rape and sexual slavery of Q’eqchí women in Zepur Zarco during the armed conflict. “The search for justice is part of redress,” explains Manuela Alvarado, a K’iche’ Maya and former member of parliament (1996–1999). “For justice, the state needs to create political, economic and social conditions that make it possible for women to regain their voice and zest for life. They need to be able to live in dignity and participate in public life and policy-making. Their worth and their courage need to be recognised.”

Patricia Galicia is a radio journalist based in Guatemala City.
patigalicia@yahoo.com