Farming in the metropolis

Urban agglomerations can benefit from promoting practices that seem rural at first glance. Nairobi offers a case study for the need to develop urban agriculture to tackle poverty and food insecurity. Low-income Nairobians grow their own food as a survival tool, mitigating hunger and malnutrition. 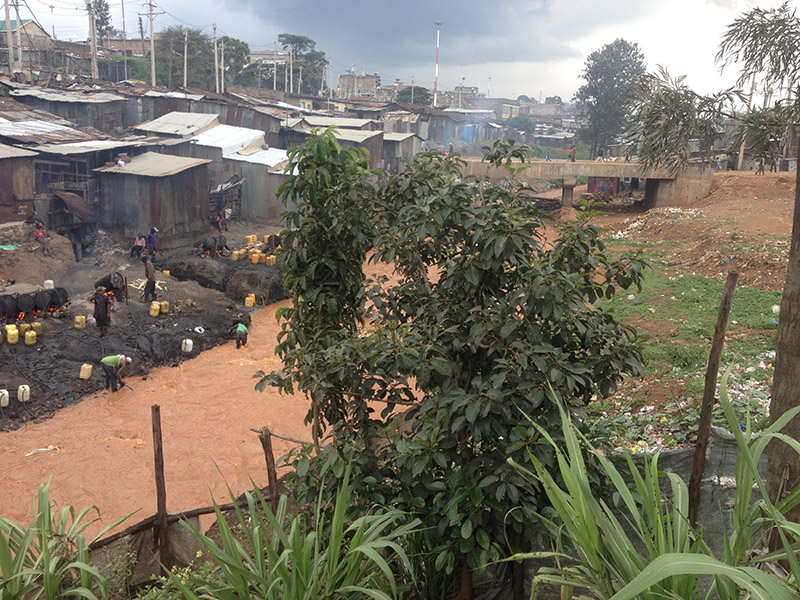 Urban gardening in Nairobi is a form of small-scale subsistence farming. Of these farmers, most are women. They are responsible for feeding their families. They know only too well from personal experience, that food insecurity is a serious issue in urban areas (see box).

Low-income neighbourhoods of Nairobi have limited space, so most urban farms are small-scale plots growing staple foods like greens and maize. They only require few inputs, tools and technology.

Urban agriculture improves the resource-efficiency of the urban ecosystem by linking production to consumption. Some experts even speak of that cycle as the urban metabolism. In any case, the goal is to minimise waste by reusing resources. In capitalist consumer societies, by contrast, vast amounts of waste are generated.

Urban gardening, however, serves resource efficiency. As chemical fertilisers are unaffordable, small-scale farmers use animal manure or compost. Wastewater is also a viable input for urban vegetable cultivation when appropriately treated. It can supply the nitrogen, phosphorus and potassium that some crops need to grow. The opportunities for inputting organic waste and wastewater into food production are limitless, but integrating these practices requires knowledge on the part of the farmers and those who regulate the systems.

There are many promising trends. Some residents of Kibera, Nairobi’s biggest slum, have developed a “sack gardening” technique. Indigenous vegetables are cultivated in reused sacks, such as cement bags. Holes in the sacks allow the vegetables to grow out the sides. In 2008, Solidarités International, a non-governmental organisation, promoted this trend of vertical gardening by distributing free seedlings and offering technical advice. This form of urban agriculture has been shown to increase food availability. Participants reported they became less likely to skip meals.

In Kibera, locally grown vegetables are also sold to local kiosk vendors, for example, with a small share of the revenue set aside for garden maintenance. This model was developed by the Kibera Public Space Project 01 with the Kounkuey Design Initiative. A business called “Grow Kenya” sells compost generated from on-site community toilets. A women’s collective harvests water hyacinth, an invasive weed, to make baskets and crafts.

Urban agriculture optimises the use of space. As Katrin Bohn and André Viljoen (2005) pointed out, food can be grown on a great variety of plots: “big, small, horizontal, sloped, vertical, rectangular, triangular, irregular, on brownfield sites, on greenfield sites, in parks, on reclaimed roads, on spacious planes, or squeezed in corners”. In their eyes, spatial efficiency serves three ecological functions:

Urban agriculture not only has ecological advantages. Especially when cultivated in shared spaces like community gardens, urban farms yield social benefits as well. The simple truth is that city residents need green spaces.

A public space assessment from UN-Habitat found that, in Nairobi, slightly more than eight percent of the land serves public recreation. The international standard, according to UN-Habitat, should be at least 15 %. Compounding the problems in Nairobi, almost one third of the recreational land is not accessible to the public. Opening hours, fees and other barriers limit access. As is true all over the world, the situation tends to better the more affluent neighbourhoods are.

In a low-income estate called Dandora, youth reclaim underutilised spaces and managed them communally. The results have been an increase in employment and a reduction of crime. Maintained and used community spaces enhance security. The group called the Dandora Transformation League, among other activities, rents out a community garden for weddings and events. It has also established community parking lots to generate revenue.

Urban agriculture is now considered a promising approach to improving food security and environmental sustainability. Legislation must support it. Reforms have been adopted in many cities around the world. Nairobi is one of them.

In the past, Nairobi City Council used by-laws as well as national legislation to prohibit food cultivation on public streets and the keeping of livestock in the city. It worried about health problems and food safety. Civil-society organisations (CSOs) campaigned for change. They argued that legalisation would improve incomes and health. The CSOs insisted on the reform of land laws given that small-scale urban farmers would clearly be overburdened if they were required to get any kind of formal permit.

In 2015, the “Urban Agriculture Regulation and Promotion Act” took force. It was designed by Kenya’s Ministry of Agriculture. The goal was to support residents of high-density and informal settlements. The new law provides for supportive structures such as instructional spaces and training, and it also regulates several relevant issues such as marketing, storage or organic-waste management.

This reform is promising, but it needs to be implemented properly. Unfortunately, the law neither has specific provisions on how to acquire permission to use public land for community gardens, nor does it spell out how the government must provide resources such as water, seeds and tools.

To tap the full potential of urban gardening, much more needs to happen. Many urban gardeners are not even aware of the new law. For example, not a single member of a community garden in Mathare knew recently that urban agriculture had been legalised. They still feared the government would destroy their project. Once they were made aware of the reform, they asked for the kind of government support the law foresees, but they were denied since they did not offer any bribes. Passing reasonable laws is not enough; follow through and administration is just as important.

Katie Cashman is a sustainable urban consultant who was working with UN-Habitat (United Nations Human Settlements Programme) in Nairobi when she wrote the article.
kcashman23@gmail.com