Better without the TPP

In Chile, Peru and other Pacific Rim countries, civil-society organisations are protesting against the implications of the Trans-Pacific Partnership (TPP). In particular, critics oppose clauses concerning intellectual property rights and the judicial self-determination of nations.

contributed to D+C/E+Z in spring 2016 as a journalist based in Santiago de Chile. 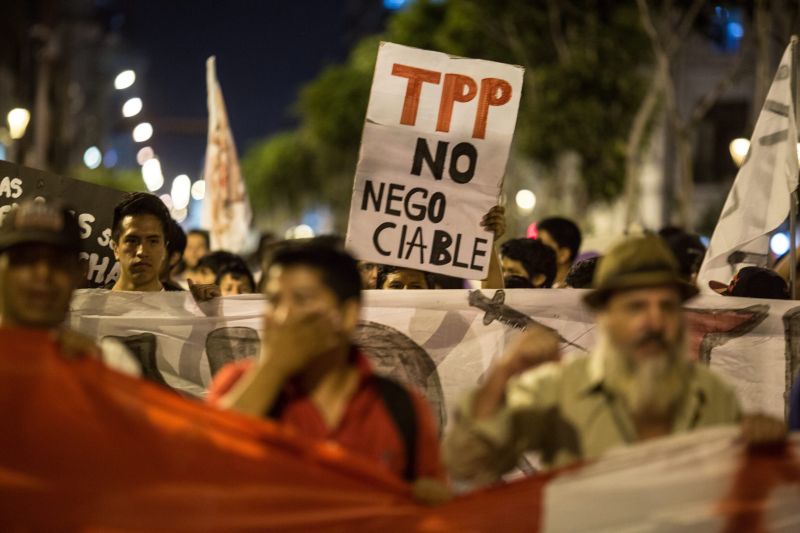 Castaneda/picture-alliance/dpa Around 1,500 people protest the TPP in Peru in early February.

On 4 February, the leaders of 12 Pacific Rim countries – Australia, Brunei, Chile, Japan, Canada, Malaysia, Mexico, New Zealand, Peru, Singapore, the USA and Vietnam – signed the TPP text. The controversial free-trade agreement is an equivalent to the equally controversial Transatlantic Trade and Investment Partnership (TTIP), which is still being negotiated.

The TPP impacts 40 % of global gross domestic product and touches the lives of 11 % of the world’s population. Among other things, the USA, which has taken the lead in the partnership, wants to eliminate tariffs that are hindering its exports.

In various signatory states, representatives of civil society are speaking out against the introduction of binding, deeply controversial rules that will affect legislation concerning labour relations, environmental protection and intellectual property. They also express frustration because the treaty was negotiated in secrecy. Chilean and Peruvian non-governmental organisations criticise the USA and their own governments accordingly. “This is a free trade agreement that governments negotiated without input from citizens, indigenous peoples or parliament,” argue representatives of Chile Mejor Sin TPP, an NGO.

Criticism is directed in particular against rules concerning the protection of intellectual property, including patents. The enforcement of pharma patents would make medications more expensive and could undermine the performance of public health-care systems. In October 2015, two north American economists, Joseph E. Stiglitz, the Nobel laureate, and Adam S. Hersh, warned in a syndicated column of Switzerland’s Handelszeitung: “The upshot is that pharmaceutical companies would effectively be allowed to extend – sometimes almost indefinitely – their monopolies on patented medicines, keep cheaper generics off the market and block ‘biosimilar’ competitors from introducing new medicines for years.”

Further points of contention include the application of copyright laws to the internet and the regulation of sectors in which private-sector firms compete with state agencies. Critics consider the judicialisation of the world economy to be the worst aspect of TPP undermining the nation state and its legal system: transnational corporations would be allowed to sue the government before international tribunals of arbitration if they think that a country’s economic policies hurt their interests as investors.

Alleen Brown has elaborated on the website The Intercept that corporate lobbyists from companies like Caterpillar and Halliburton have had a bearing on TPP clauses. At the same time, members of the US Congress were only allowed to assess one section at a time while under supervision in the basement of the Capitol. Taking notes was strictly prohibited. The full text of TPP was only published after it was signed by the governments.

In an open letter from 25 November 2015, Chilean legislators Giorgio Jackson, Camila Vallejo and Gabriel Boric charged that the agreement lacks any kind of parliamentary legitimacy because “legislators have only been allowed to approve or reject the project so far. Making changes has not been permitted.”

On 29 January, experts, legislators and representatives of civil society from Peru, Canada, the USA and Mexico met in Mexico City to coordinate international opposition to the TPP in towns, on the streets, in the media and before the courts. The time of secret negotiations is over.

Frederico Füllgraf is a journalist based in Santiago de Chile.
f.fuellgraf@gmail.com