In June, Recep Tayyip Erdogan became head of state in Turkey’s new presidential system, which grants him enormous powers. But the country is in the midst of a veritable economic crisis. Erdogan has his back against the wall — this time without a scapegoat whom he can make responsible for his home-grown problems. On top of everything else, his shifting alliance policy has destroyed trust in Turkey abroad. 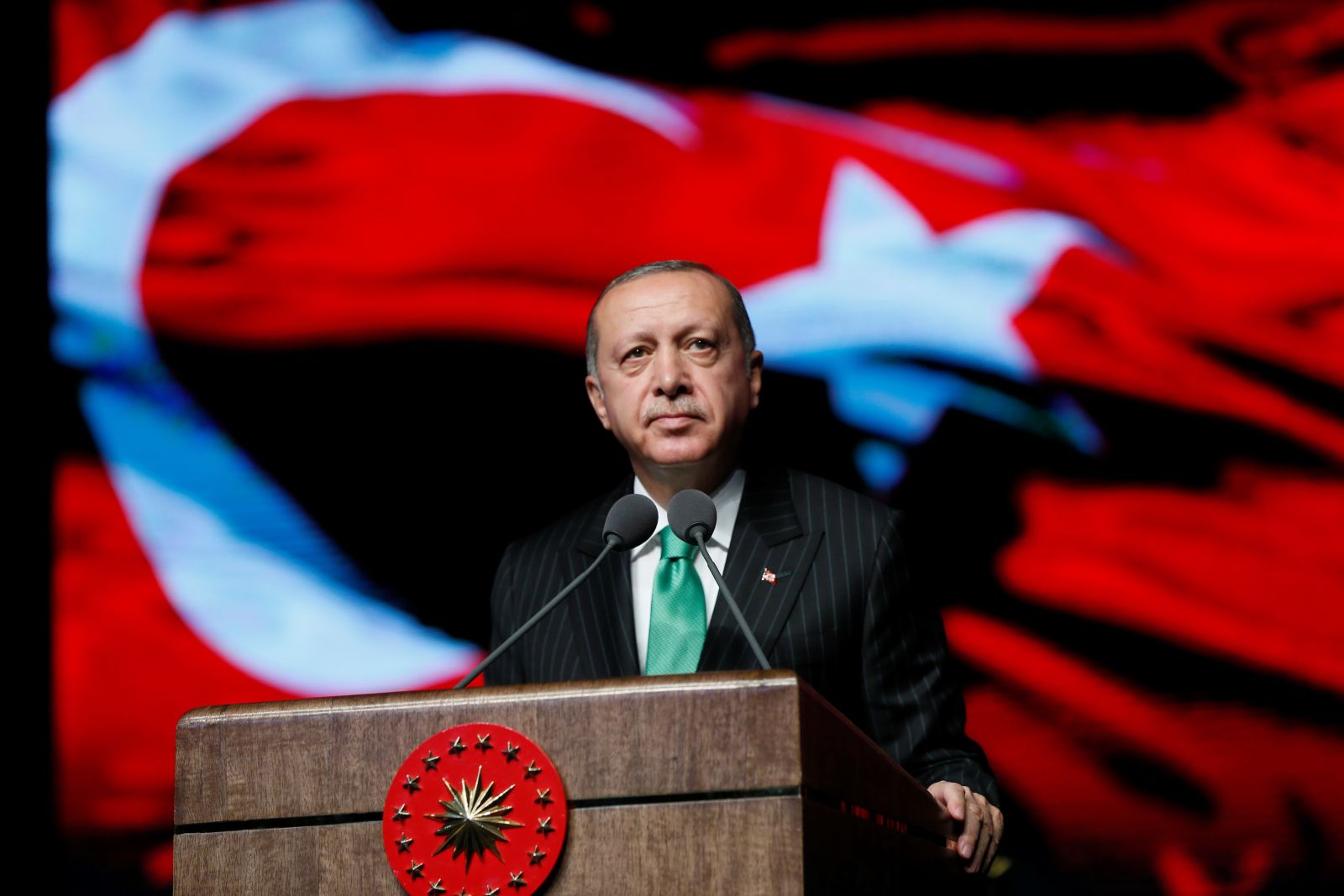 picture-alliance/AA President Recep Tayyip Erdogan has more power in his hands than any elected statesman in the history of Turkey.

When Recep Tayyip Erdogan was elected president on 21 June 2018, Turkey bid a final farewell to democracy and the rule of law. The former parliamentary republic has become an authoritarian one-man state. The new presidential system grants the 64-year-old greater authority than any elected leader has ever possessed in the country’s 95-year history.

For two years following a failed coup d’état, a state of emergency was in place that allowed Erdogan to rule by decree. These special rights have now been converted into ordinary laws. In other words, the state of emergency has been declared permanent. Consequently, Erdogan can appoint governors, impose curfews, forbid protests and demonstrations, shut down associations and more closely monitor individuals and communication. Erdogan can also appoint 12 of the 15 constitutional judges. He is the commander-in-chief of the armed forces. He chooses the ministers and is the leader of the conservative Islamic Justice and Development Party (AKP). Parliament has been reduced to simply rubber-stamping his policies. There are no checks and balances as are typical of the presidential systems in France and the USA.

Nonetheless, the snap election in June did not unfold quite as Erdogan had hoped. Receiving 42.6 % of the vote, the AKP fell six seats short of an absolute majority in the 600-member parliament. It was forced to enter into a coalition with the extreme-right MHP. In response, Erdogan sharpened his tone towards the Kurdish HDP, which, in spite of all reprisals, once again managed to clear the 10 % hurdle and is thus represented in parliament once more. Shortly after the election, Erdogan was quick to threaten cities in south-eastern Turkey whose municipal administrations are led by HDP members that they would “pay the price” for allegedly passing on tax money to the terrorist organisation PKK.

Erdogan would actually welcome a new flare-up of the Kurdish conflict because it would distract from Turkey’s most urgent problem. The currency crisis has become a full-blown economic crisis. “Give this brother of yours the authority and he will show you how to deal with interest rates and all the rest,” Erdogan had boasted before the election. The reality looks different. The lira is in free fall. In August, the inflation rate rose to 17.9 %. Turkey is facing stagflation, a situation in which economic growth slows while consumer prices rise. The private sector is already having enormous difficulties servicing its foreign, dollar denominated debts (see E+Z/D+C e-Paper 2018/09, p. 13). The next few months could bring company closures and redundancies.

Many people in Turkey are totally unaware of the economic drama’s ramifications because they are being lied to on a daily basis by the largely conformist media. “Foreign powers” and the “interest lobby” are being painted as the guilty parties. In fact, it was Erdogan himself who sparked the currency crisis by casting doubt on the autonomy of the Central Bank and publicly rejecting the interest system. Nevertheless, even an autocrat cannot flout economic logic forever. The various financial injections Qatar has given Turkey are not the solution, nor does it help that Erdogan supporters have been exchanging their dollars for lira.

The Turkish economy is also being put under pressure by the government’s tensions with the USA. The root cause is the detainment of Andrew Brunson, the American pastor. He is accused, absurdly, of supporting terrorism. Erdogan has a tendency to declare anyone who opposes him an “enemy of the state”. This approach has destroyed trust in the independence of the judiciary once and for all. Erdogan has long wanted to exchange Brunson for Fethullah Gülen. Gülen is a controversial Turkish imam who lives in the US, and whom Erdogan blames for the attempted coup d’état of 2016.

US President Donald Trump responded to Brunson’s arrest with massive sanctions. The US has demanded a resolution of this issue by mid-October. Otherwise, tensions between the two countries could escalate.

The Turkish president is in a tighter spot than he has ever been before. And whenever he finds himself in a difficult position, he is know to perform a political about-face. In the past, for instance, he criticised China for persecuting the Uighurs, styling himself as a protector of the Muslim minority. Now that he faces a financial crisis, he has dropped the issue. His reward came in July: a loan from China to Turkey, amounting to $ 3.6 billion. On 28 September, Finance Minister Berat Albayrak, who is Erdogan‘s son in law, signed a contract with McKinsey. The business consultancy will advise him on how to reform government bureacracy with business relevance. Albayrak has thus clearly acknowledged that he does not know what to do himself. It is ironic that a private-sector company from the USA will now get very deep insight into Turkey’s economy.

His sudden overtures towards the European Union (EU) also come as no surprise. The very EU that he had long since turned away from, whose countries he accused of using Nazi practices and whose citizens he is keeping as political hostages, including German journalists.

The EU has no interest in allowing Turkey to slide into a full-fledged economic crisis because its banks have issued sizeable loans to Turkish financial institutions. If the loans are not serviced, the EU will face difficulties of its own. Furthermore, the EU needs Turkey to act as a buffer to prevent even more refugees from coming into Europe and thereby strengthening right-wing forces. Moreover, Turkey depends on EU investments and cannot afford to be completely isolated. That is why it cannot assume a position of strength with regard to the EU in spite of the refugee problem. Europe now has an opportunity to exert pressure on Turkey and demand that it comply with the rule of law, particularly when it comes to its own citizens. The option of Turkey joining the EU is even not discussed anymore.

Another trouble spot for Erdogan is the war in Syria. In mid-September, he reached an agreement with Russian President Vladimir Putin to create a demilitarised buffer zone in the Syrian region of Idlib. In doing so, the leaders averted the risk of another humanitarian crisis for the time being. An attack by Syrian and Russian forces would result in millions more refugees. Turkey has already taken in 3.5 million people who have fled from Syria or Iraq. Despite the provisional agreement, Turkey faces grave dangers. What will the jihadist groups do who have already reached the Turkish border? What will happen with those who are still fighting in Syria? And what will be the reaction of the PYD, the Syrian offshoot of the PKK?

The Turkish opposition can’t capitalise on any of these problems. Their work is either being hindered by arrests, as in the case of the HDP, or is not receiving any media attention, as in the case of the Iyi Parti (the Good Party). What’s more, the largest opposition party, the CHP, looks torn by in-fighting. Its leader, Kemal Kilicdaroglu, is adamantly refusing, after yet another failed campaign, to make way for Muharrem Ince, who received over 30 % of the vote in the presidential election. Many hoped that Ince would be a breath of fresh air. The results of his party at the parliamentary election was relatively poor – they only got 22.6 % of the votes. But at the presidential election Ince himself got even votes from other parties’ supporters. But the rising star Ince died down as quickly as the Turkish lira lost value.

Despite all the power he holds, Recep Tayyip Erdogan is facing the most difficult moment of his political carrier. His aggressive policies have put off allies like the US and the EU. Instead of single-handedly building relationships with a variety of countries, the only room to manoeuvre that he still has in foreign affairs is exploiting the weaknesses of other states and the conflicts that they have with each other.

There is no scapegoat that he can blame for the economic crisis. Ultimately, everything will depend on when his voters begin to ask questions and how they react when they discover that they have no more money in their pockets. Only once they take to the streets will Erdogan’s system begin to crumble.

Timur Tinç is a journalist of the daily newspaper Frankfurter Rundschau.
t.tinc@fr.de