From zero to one hundred

South Sudan’s capital Juba is growing at an alarming rate. A few years ago, it was a sleepy town of thatched huts. Thanks to peace and oil money, the capital of the world’s youngest nation is entering modernity. There are negative side effects too. This essay was written before violence erupted in Juba when D+C/E+Z was going
to press before christmas (see sidebar).

last contributed to D+C/E+Z in winter 2013/2014 as a journalist, columnist and commentator. He lives in Juba. 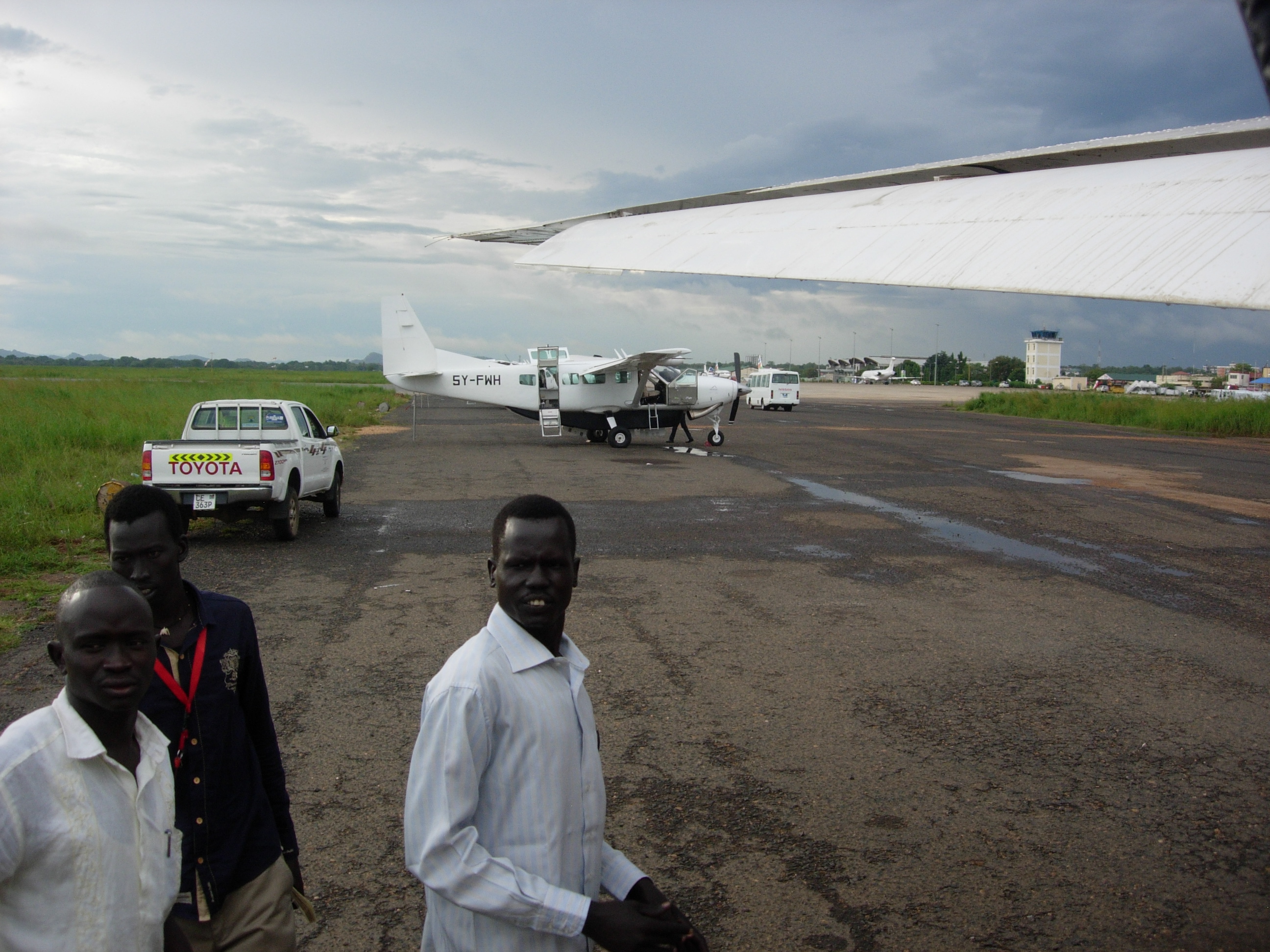 The scale of Juba’s growth is amazing. Many years ago, Juba used to be Sudan’s southern hub. It was linked by highways to Uganda, Kenya, Ethiopia, the Democratic Republic of the Congo (DRC) and the Central African Republic (CAR). During the 1983-2005 conflict, these roads were cut off as rebels besieged Juba. Today, the city is gradually recovering, and the contrast to just a few years ago is staggering.

I vividly remember how the town had decayed when I first visited it again in 2005, coming from my South African exile. The peace agreement to end 21 years of bloody conflict had just been signed. The civil war had claimed more than 2.5 million lives, most of them civilians.

Juba was a visibly neglected town. Tall and bushy grass had grown all over the airport. Animals were free to graze around the airport. Cattle and sheep were roaming about the buildings, endangering airplanes and passengers. But there was not much air traffic anyway. Only occasional Sudanese military planes landed once or twice a day, delivering food. Earlier they had brought in arms.

I found immigration officers sitting in an open space in the busy arrival hall. They neither had a computer system nor partitioned cubicles. Security was lax. No terrorist group was ever spotted, but it is known that, in the 1990s, al-Qaida leader Osama bin Laden used to be a frequent visitor. He waged his Jihad from Sudan before he was forced to flee to Afghanistan. "Osama bin Laden used to stay in this building,’’ a friend once told me, pointing at a modest house as we drove through Hai Malakal, a middle-class suburb of Juba. Many people in Juba still remember the lanky bearded Saudi. This was long before bin Laden was hunted internationally by the United States.

When I stepped out of the noisy airport hall in 2005, the weather was boiling, registering over 50 degrees centigrade. There was no taxi to hire. At that time, Juba had only 17 vehicles in total, most of which were owned by the dreaded security agents. The overwhelming majority of the people of Juba had resigned to their fate: walking on foot. The town was still quite small. Goats, sheep, ducks, dogs and chicken would take naps on the road. The drivers of the few vehicles had developed a strategy to dodge animals on pot-holed dirt roads.

The most shocking thing was that the town was crowded with walking skeletons. The people were starving. Their livelihoods had been destroyed. The town was swarming with flies and malaria-inflicting mosquitoes. Most houses were thatched huts. Many were about to cave in. During the war, it had become too dangerous to go into the forest to cut the grass needed to replace an old roof. Any venture into the forest meant one risked one’s life. Going there would automatically be construed as providing support for the rebels, which was tantamount to treason.

The few modern houses still standing in 2005 had been built by the British colonial government before Sudan’s independence in 1956. Juba had patches of tarred roads in the centre of town, which had worn out due to negligence. Except in Juba, there was actually no tarred road in the rest of South Sudan at all. Khartoum had neither invested in nor developed South Sudan after the British had left the country.

Things have changed. The civil war is long over, and South Sudan has become a sovereign state. Juba is now regarded as the fastest growing city in Africa. Since 2005, the city has recorded spectacular urban expansion of at least 12.5 % per annum. Former Mayor Mohammed al Haj Babala reckons that his sprawling town is now home to a staggering 1.2 million inhabitants. In 2005, about 160,000 people had lived here.

Basic civic services cannot keep up with this rapid growth. Most people have no access to clean running water, so they depend on the water sellers. Street names and street numbers are lacking in Juba, which makes it impossible for a stranger to locate a place. The majority of the people of Juba live in darkness after sundown. The government is still working on extending the power grid. Those who can afford to do so, use their own generators. Bit by bit, the electricity grid and water pipes are laid out in the city.

But progress also comes with its disadvantages. Problems associated with modernity in cities are already being felt. Crime was unknown in the past. It is now rife. Social vices such as sex work, child abuse and domestic violence are becoming a big problem.

I grew up in Juba oblivious of serious crimes. I remember neighbours leaving their doors open for weeks on end, and returning to find their property intact. The only thieves we had back then were people who would pick trousers and shirts from huts with long sticks that they pushed through gaps between the wall and the roof. They would take any money they found in the pockets and then leave the garments behind the hut. They were hungry and wanted to buy food, but they would never kill victims.

Until a few months ago, law-abiding citizens used to be dragged out of their houses and shot for the equivalent of 100 SSP (South Sudanese Pound, about 26 Euro). Armed gangs used to maraud Juba, forcing their ways into people’s houses and extorting money. They also stole electronic equipment such as laptops, mobile phones and cameras, as well as jewellery. A new government, formed in July 2013, has cracked down on them. Juba is enjoying relative peace now.

The city also changed in other ways. Traffic jams have begun to occur in Juba. One reason is that South Sudan’s oil money has enabled the middle class to purchase cars. People are returning from exile in different parts of the world. Some are bringing along posh vehicles. Given the poor infrastructure, four-wheel drives are very popular.

In the main hospital in Juba, a ward has been nicknamed "Senke Ward’’ after the Asian motorcycle brand Senke. This ward is full of people who were injured in motorcycle accidents.

Most motorcyles are used for taxi services called "bodaboda". Unfortunately, the operators show respect neither for traffic regulations nor for human safety. It is common in Juba to see three passengers on a bodaboda riding at a breathtaking speed. Every day I count an average of six motorcycle accidents on my way to work or back home.

Despite the risks, most passengers choose bodaboda. The service is cheaper and faster than any other mode of transport available. The government is re­organising bodaboda, with regulations for compulsory wearing of helmets and illuminating uniforms that can be spotted far away. Moreover, a bodaboda will only be allowed to carry one passenger at a time.

But the problem is that laws need to be enforced. Institutions in this young country are still very weak. Capacity building, instilling discipline as well as enforcing work ethics and strengthening South Sudan’s nuanced educational system will take time.

Juba, a boom city, is attracting immigrants from the neighbours Uganda, Kenya, Ethiopia, the Democratic Republic of the Congo, Eritrea, Rwanda, Burundi and Somalia. Oil money is turning this country into a kind of Eldorado.

Foreigners say they find more opportunities in Juba than at home. In Juba, the division of labour among these immigrants is very distinct. For example, Ugandans do petty trade, selling foodstuffs such as vegetables, bananas, cassava (manioc), sweet potatoes and maize in the market. Kenyans work in non-governmental organisations and UN agencies. Ethiopians and Eritreans are into the hospitality industry such as hotels, restaurants as well as into the alcohol and soft drink business. Somalis operate gas stations, real estate, building-material warehouses and small corner shops. All of them are turning Juba into a melting pot with a bewildering blur of regional languages.

In 2005, visitors – most of them UN and aid workers – had to sleep in tents. In contrast, Juba now has more than 250 hotels, many of them of international standards. The town is well connected by air, with the most popular destinations being Nairobi, Entebbe and Addis Ababa. And at least 20 buses arrive from the Ugandan capital of Kampala daily.

The capital is also attracting rural poor who eke out a living selling tea and food by the roadside. The modern and the traditional world clash. It is common, for example, to see a man carrying a bow and arrows or a spear one side of the street, and a soldier with an automatic weapon on the other. It is similarly common for a herd of cattle to block car traffic for five minutes or even longer.

The growth of Juba can best be described by a popular story: A man returned from a four-months overseas trip and failed to locate his own house. The taxi driver could not help him. Finally, the poor man called a relative to pick him up and bring him home. All the empty spaces in his neighbourhood had been built on while he was away. The face of Juba is changing so fast, it is hard to keep track.