The Guri programme is promoting social inclusion through a city-wide network of music schools in São Paulo. They are located in disadvantaged neighbourhoods, but do not struggle with the lack of discipline that haunts the public schools.

last contributed to D+C/E+Z in summer 2014 as a professional flutist and professor of music at São Paulo State University. 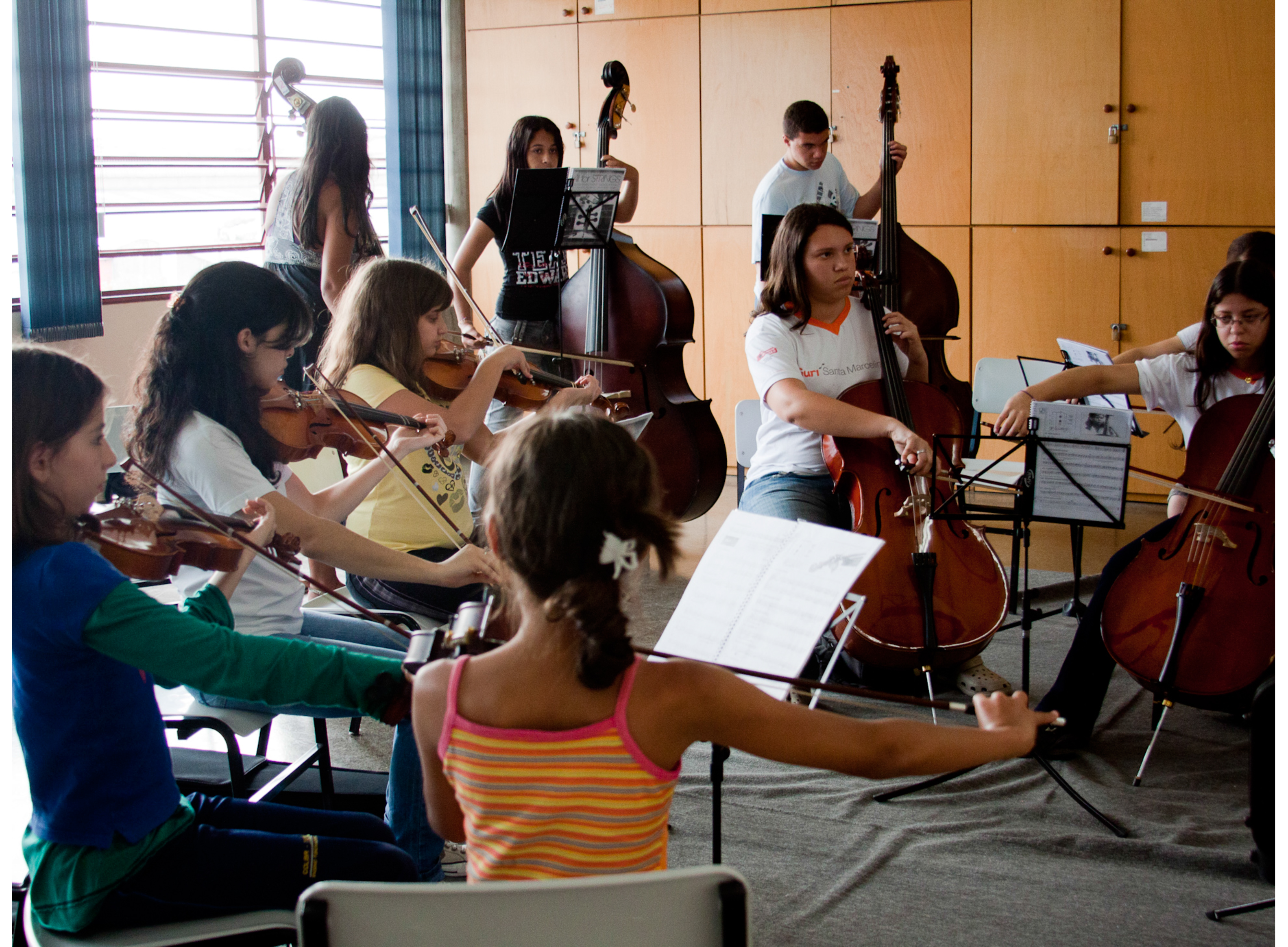 Life in São Paulo is tough, and it is common among Paulistanos to adopt a fatalistic attitude. Not so Paulo Zuben, a composer and musicologist. He is the artistic and pedagogical chief of the Santa Marcelina Guri programme. Its mission is to provide children and adolescents in socio-economically deprived areas with high-quality musical education.

Guri runs 46 music schools in greater São Paulo, serving more than 13,000 children and adolescents. The idea is to empower citizens through music education at an early age, engaging families and deprived communities.

Guri is funded by the government of São Paulo state and managed by the non-governmental organisation Santa Marcelina Cultura (SMC). SMC is affiliated with the Congregation of Santa Marcelina, a Catholic organisation that administers two universities and a large hospital in São Paulo. Apart from Guri, SMC also operates a conservatory of international reputation, the São Paulo State Music School.

The conservatory is located in the gritty heart of the city. This is where Zuben’s office is located. From his window, he can see the city’s disparities: crack addicts and alcoholics sleep in the shadows of a shining concert hall, the Sala São Paulo, which is home to the prestigious local symphonic orchestra. Locals call this neighbourhood “Crackland”, and students have been mugged near the conservatory. None­theless, there is a palpable feeling of joy among the children and adolescents in its crowded hallways. Guri is an ambitious programme. One of its goals is to provide the skills needed to be accepted into this top-notch conservatory to students who have a low socio-economic status.

Guri is about much more than simply teaching music however. Zuben is confident that he is contributing to greater social equality: “We believe that the consequences of our actions are effectively beyond music learning: we are helping children, adolescents and their communities to improve their lives in a context where they otherwise would not succeed.”

In the Guri curriculum, students aged six to 18 are offered group instrument lessons. They are taught music theory, rhythmic training, choir and chamber music. They can choose between 22 different instruments. Many of them use instruments that belong to Guri because they cannot afford their own. Most must practice on their schools’ premises, but some of the more advanced students are allowed to take the instruments home.

SMC’s socio-pedagogical model is based on a combination of music education and social assistance. The 200 music teachers cooperate closely with a team of social workers, whose primary objective is to overcome social and familiar obstacles to music education.

“The social workers, primarily, are working to keep the students in the programme,” says Zuben. “Our schools have been intentionally built in high-risk neighbourhoods, where teenage pregnancy, alcoholism, drug abuse and domestic violence are more common than in more privileged areas.” The social workers reach out to parents, informing them of opportunities such as job training or health-care services, for instance. “They help the parents to become aware of their obligations to their own children”, says Zuben.

There is even more to the programme, says Ricardo Appezzato, one of Guri’s pedagogical coordinators: “We are constructing citizenship. We educate parents about laws like the Estatuto da Criança e do Adolescente.” This law was passed in 1990 and meets international standards of children’s rights. Many of Brazil’s poor, however, are not aware of such legislation. Obviously, even fewer have an idea of how to get their rights enforced.


The right to play an instrument

The philosophy of the Guri programme is that every child has the right to learn music and to have access to an instrument.  Appezzato argues that it is “a common misperception” to believe that music is for “relaxing”. Since playing music is an exercise in discipline, stimulates a sense of community and serves emotional fulfillment, Appezzato insists that it belongs “in the standard curriculum along with mathematics and sciences”.

According to Zuben, music education reduces feelings of subjugation and helplessness in vulnerable communities. “Students learn respect for themselves, for their instrument, for others. They become protagonists in their own lives, making their own decisions and learning to express themselves.” Zuben considers the orchestra a “metaphor for citizenship” because students learn that every single voice matters. They have to listen to others and harmonise with them. Everyone is challenged to do his best. “In playing music, you put into practice the act of respecting yourself and others,” Zuben emphasises.

Team building is essential. Students audition for 350 places in two sym­phonic bands, a stringed orchestra, symphonic orchestra, guitar ensemble and two concert choirs. Students come together from all over greater São Paulo, sometimes travelling long distances to play in the groups. Some students spend more than three hours on busses in São Paulo’s horrible traffic to go to a rehearsal, but they feel it is worth it.

Jeasil da Silva Santos, a young French horn player, reports: “I wake up at 5:30 to get to the rehearsal by 8:00, so that I have time to get warmed up before we start.” He doesn’t want to miss anything, because “you learn something new in every rehearsal, you grow and expand.” He concludes with a shy grin: “I’m an artist!”

It is striking that Guri does not struggle with the major discipline problems that haunt the public schools. Guri coordinator Appezzato says: “We have a contract of responsibility with the students.” The deal includes that students must produce written evaluations of their performance annually. Moreover, there are regular meetings with all students to discuss upcoming challenges and take joint decisions on what rules the schools need. “Our approach encourages the students’ capacity for reflection and critical thinking, as well as their active participation in the process,” he says.

According to Appezzato, many students enter Guri without knowing how to read and write. “The public school system is inadequate and degrading. Teachers are badly trained, badly paid and have low self-esteem. They have pre-conceived notions that students are incapable of learning.”

The Guri programme is different. The programme relies on a rigorous selection process for teachers and staff. Moreover, it runs a literacy programme for students and their families. Its name, “Guri pra Valer”, is a pun that combines the words valer (value) and ler (to read).

International cooperation helps to promote respect for socio-cultural diversity, which is what the Guri programme intends. Accordingly, SMC has initiated an impressive number of international exchange partnerships with such institutions as the Juilliard School in New York, the Paris Conservatory and Cologne Musikhochschule.

Katherine Zezerson of the Sage Gateshead educational project in England is one of the visiting international musicians who appreciate the approach. She came to Brazil for a series of workshops and concerts with Guri last year. According to her, “each of our institutions has grown and developed from the partnership.” Guri student Daniele de Almeida agrees: “Although we don’t speak the same language, the music brings us together.


Sarah Hornsby is a professional flutist and professor of music at São Paulo State University.
sbhornsby@yahoo.com