Hungry or malnourished children find it harder to learn than their well-fed peers. Free school meals are a successful policy measure to promote development, for instance in a country like Cambodia, which has a high school attendance rate of over 95 %. Schools are the best place to reach a large number of children from the poorest households. 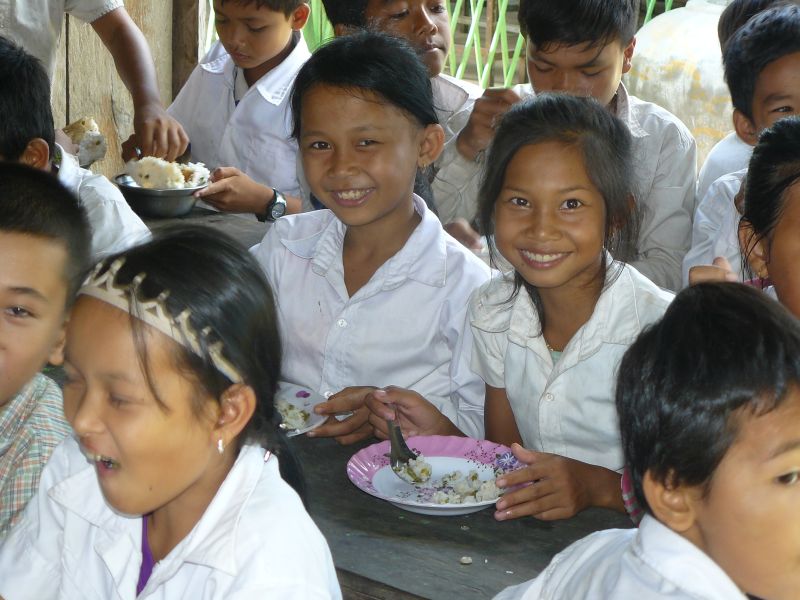 Bliss The school day begins with a shared meal.

The main goal of school feeding is to improve the nutrition of children in primary schools. Better nutrition benefits children‘s health and reduces or eliminates delays in their physical development. Properly fed, the children are also better able to follow along in class and less likely to leave school in the middle of the day because of hunger.

Providing meals is thus the first step to achieving a further goal: improving performance in school. School meals lead to a sharp reduction in the number of pupils who drop out and increase the number of children, including from poorer households, who go on to secondary school.

The World Food Programme supports school feeding in Cambodian schools in poor districts (see box). Last year, in 18 of the participating schools, researchers from University of Duisburg-Essen’s Institute for Development and Peace (INEF) conducted a study, assessing the programme component that demands that the necessary food be bought from local sources. The researchers found that the project was almost 100 % successful. They considered the following factors decisive:

Providing free school meals in primary schools is probably the best way to reduce malnutrition in children between the ages of six and twelve. It makes sense to include preschools in the programme, as many of the school systems under review do. Children can benefit starting at the age of three. Furthermore, school feeding is a very inexpensive measure that directly targets every enrolled child – and thus almost all of a country‘s households with children of primary-school age. In contrast, much publicised alternatives like educational campaigns by health centres or work with women‘s groups are less effective.

By exchanging information about school food with parents, particularly mothers, it is very likely that families‘ eating habits will slowly change, thereby allowing younger children to benefit indirectly from the programme. Thus it is expected that one secondary effect will be better nutrition for children during their first 1,000 days of life.

School feeding builds on almost three decades of experience, most of which was collected and analysed in Latin America, especially Brazil. The strengths and weaknesses of this approach are therefore well understood. It has been demonstrated, for instance, that the poorest of the poor are not reached in places where school attendance rates are low and primary schools do not exist, are of poor quality or difficult to reach. On the other hand, school meals are an excellent way to provide good nutrition to enrolled pupils from poor households, improving their health and thereby their chances for success at school.

School meals also encourage parents from extremely poor backgrounds to send their children to school in the first place. Often, the free meals are the main motivation or even the only one. And in desperately poor countries like Chad, Mauritania, Niger and Sudan, providing regular meals at school is the only way to guarantee children a modicum of school success.

In countries where the nutrition situation, particularly of children, is poor compared to the average income, school feeding can make a significant contribution to healthier nutrition and thereby reduce the number of children who are underweight or suffer from delayed growth. Apart from Cambodia, this applies to Tajikistan and Laos, for instance, where poverty rates are declining without corresponding to improved nutrition for women and children.