Charitable and faith-based initiatives must jump in

After years of political instability, the school system in Burundi is in shambles state. Government schools and many private schools are barely functional. An important pillar of the educational system are schools run by non-governmental development organisations and faith-based organisations. They are charitable institutions, not run by the state but not profit-oriented. There are far too few of them to serve all children.

contributed to D+C/E+Z in spring of 2019 as the founder of Fondation Stamm, which supports street children and orphans in Burundi. A German partner organisation is burundikids. In November 2017, Verena Stamm was awarded the Federal Cross of Merit for her work. Engagement Global has supported several of her projects. 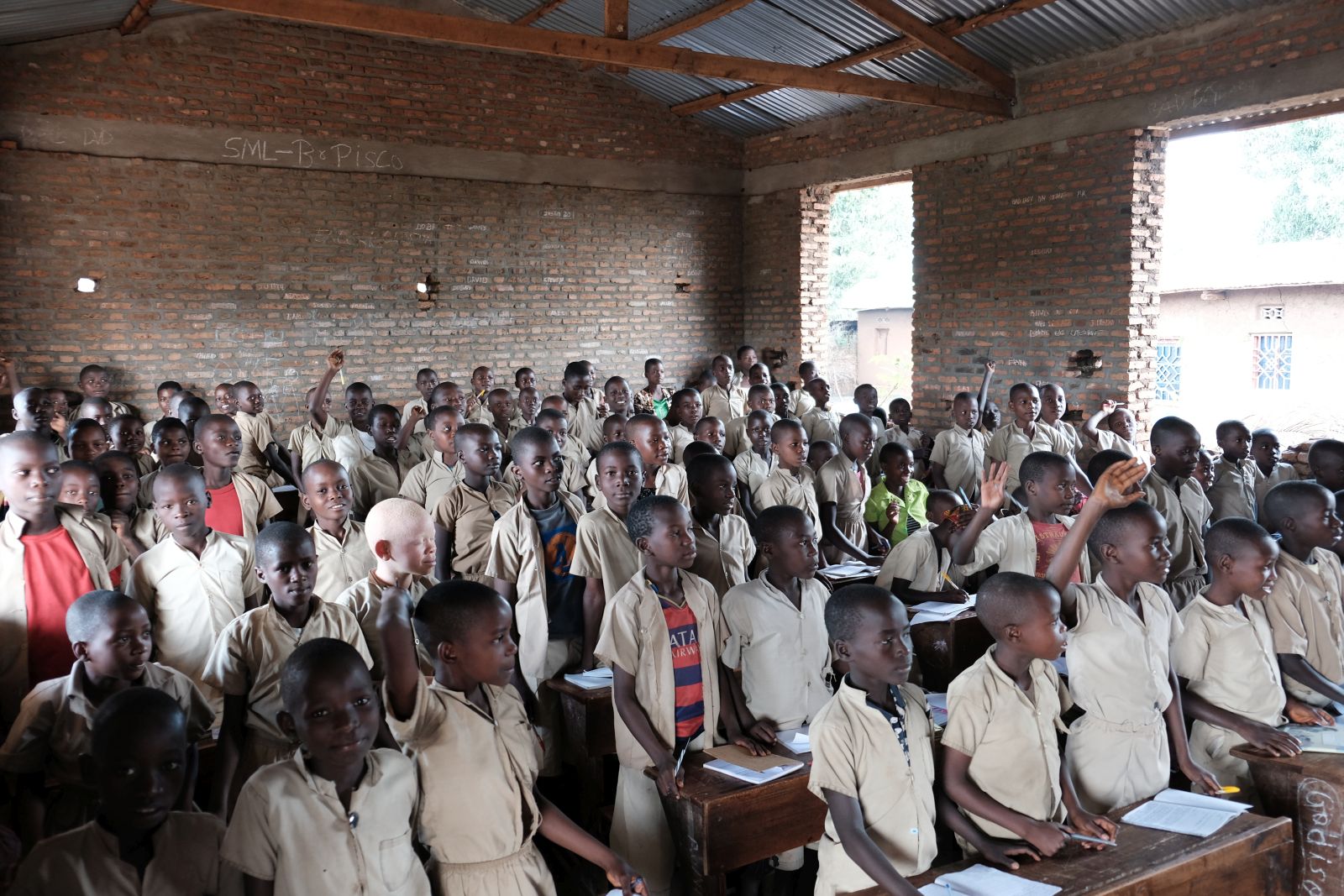 Philipp Ziser, Burundikids Schools in Burundi are overcrowded and often still under construction.

The further away a school is from the main agglomeration of Bujumbura, the more difficult it is for children to attend. The biggest hurdle is usually the long journey, and children often have to set out with empty stomachs. Although parents have not had to pay tuition for government schools since 2005, they still have to buy school supplies and uniforms. For that reason, many boys and girls drop out.

State schools in and around Bujumbura are also in poor condition. Some of the buildings are incomplete and lack windows and doors. The classrooms are overcrowded, and there are not enough benches or textbooks. The children sit on the floor and learn very little as a result. A little boy named Jean told us that their uniforms always get dirty from sitting on the wet floor and that it is difficult to write on the floor. Our non-governmental organisation Fondation Stamm (see my article in Focus section of D+C/E+Z e-Paper 2018/04) provided benches to a school in Rukaramu, and now the children have a place to sit, but they must squeeze close enough together. They were overjoyed, even though it was just a drop in the ocean.

In 2006, Fondation Stamm built and opened its own school in Bujumbura, which was initially for primary and secondary pupils. We wanted to accept all children, whether they were rich or poor. From the beginning, we felt it was important to emphasise quality. Only a high-quality education will prepare young people for the future.

After the school opened, we were directly confronted with state reforms regarding the languages of instruction. The lessons are conducted in Kirundi, the children’s native language, and French, the official language. But starting in 2009, we had to introduce English and Swahili as well.

Swahili is an east African language that is spoken by many people in Bujumbura, but is much less widespread in the countryside. Knowledge of English is also rare, and many instructors are not qualified to teach it. We hired a Congolese instructor to teach Swahili and an English instructor with a university degree.

Our school is attended by the children of wealthy parents, children from poor neighbourhoods and even street children from the shelter we run. Nowadays 45 former street children are receiving instruction in our school. They are well integrated, enthusiastically preparing for secondary school.

One example is 11-year-old Salim Ahumugisha. His father remarried after the death of his mother and simply put the boy out on the street. At first he stayed with a relative, but that person became unable to take care of him. Now Salim is happy that he can attend our school.

Claver Kirimwagagabo had to go begging with his parents even though he very much wanted to go to school. But his parents were too poor to afford school supplies. Claver wants to become a teacher and teach children for free. We took him into our shelter, and now he can finally study in peace, which he says is more important to him than playing or hanging around on the street.

Because our school is only 20 kilometres from the Congolese border, there is a great deal of exchange. About 15 % of our pupils come from the neighbouring country. Their parents cannot afford the bus fare, so the kids have to walk the long distance.

Our school places a particular focus on girls. Girls are neglected by their families with regard to school and education. In the countryside, cash-strapped families tend to only send the boys to school. Girls have to help with the housework, take care of younger siblings and do fieldwork with their mothers. Older girls often marry early because of the dowry.

One example is Aline Irakoze, who was forced by her father to go into the fields with her stepmother in order to help with the harvest. She was already in secondary school and did not want to miss her lessons for any reason. But her father refused to give her money for tuition and supplies. He locked her in her room, but she climbed out the window in order to go to school. We intervened and spoke with her father. That helped matters and now she is allowed to go to school.

Girls with unwanted pregnancies lose the opportunity to finish school. Unfortunately, it often happens that girls are sexually abused by teachers or even by school directors, who promise them good grades in return. If the girls become pregnant, they have to leave school and are often rejected by their families. We take in such girls or try to find them a place in a different school.

The government of Burundi is trying to address the sex-abuse problem in an idio-syncratic way. In order to curb temptation, the Minister of Education has forbidden schoolgirls from wearing make-up. They are not allowed to come to class with make-up on, and their hair must be cut short. Naturally there were protests in the beginning. But now the students have accepted the rules. The Ministry of Education is trying to create order across the board and has closed many schools that were not performing well enough.

Religious communities also operate their own schools. Catholic schools are very charitable and humane, but also strict. Education is one of the Catholic Church’s missions. Its schools are well equipped, and there is no lack of textbooks and good teachers. Therefore these schools are very popular.

One example is the Jesuit school “Saint Esprit”. It is a secondary school that was founded in 1952 when Burundi was still a Belgian colony. In order to be accepted, the children have to take tests, and during the selection process no distinction is made between boys and girls or rich and poor. Only the best pupils are accepted, which many consider discrimination. The real downside is that children from other religions are not accepted to all Catholic schools.

There are also some Muslim schools, where girls have to wear headscarves, and the school uniform consists of long blouses and long skirts. But the schools respect the state school programme, and Koran lessons are voluntary.

Generally speaking, none of the schools teach much in the way of culture. Our school at least offers drum lessons. Our pupils are very proud to be able to learn traditional drumming and demonstrate their skills at festivals. Apart from that, though, all of the pupils, like young people everywhere, want to listen and dance to modern music, and traditional singing is being lost. It is also true that their native language, Kirundi, is becoming increasingly “Frenchified”. Of course that also has to do with the fact that there is no Kirundi translation for modern concepts like “internet”.

Verena Stamm is the founder of Fondation Stamm, which supports street children and orphans in Burundi. A German partner organisation is burundikids. In November 2017, she was awarded the Federal Cross of Merit for her work. Engagement Global has supported several of her projects.
verenast@fondation-stamm.org
http://burundikids.org/index.html