Uganda has benefited from peace journalism

Uganda has a history of conflict and violence. In particular, the strife caused by the Lord’s Resistance Army (LRA) in northern Uganda from 1995 to 2004 made peace efforts necessary. At the time, a strong foundation for peace journalism was laid. Its principles are of lasting relevance in view of unrest in border regions and the refugee population which is growing due to civil war in neighbouring countries. 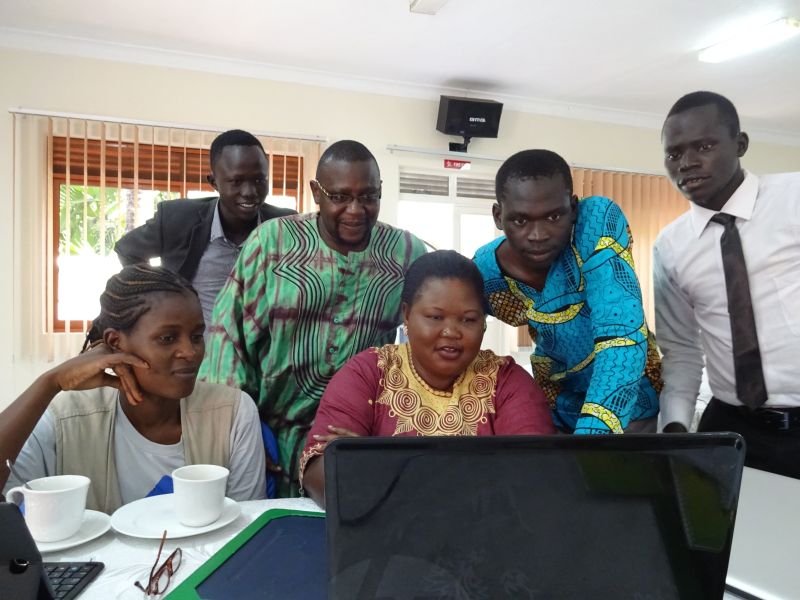 my Peace journalists from Uganda and South Sudan.

After years of failed military interventions and series of futile peace talks, the Ugandan army opted for peace journalism in order to try to reach out to LRA insurgents. In 1998, the first peace radio was established in Gulu, a town in northern Uganda. It was called Radio Freedom. The army used it to communicate not only with displaced people, but even the rebels, inspiring hope among child soldiers that demobilisation might be possible.

After the media highlighted atrocities collectively, international attention turned to the LRA conflict. Donor agencies started to consider radio programming and professional media work as a way to promote peace and later to reduce tensions in the post-conflict situation.

Important principles of peace journalism are to avoid hate speech and involve voices from all sides of a conflict. Balance, fairness and factual accuracy matter very much. The idea is to convey an understanding of a conflict’s reasons, history and possible non-violent solutions rather than to fan the flames. Attention must be paid not only to acts of violence, which are easy to report, but also to longer term developments in society, which are harder to cover.

Effective peace reporting does more than merely report events. It puts them in context, by engaging communities. Various approaches matter, including social media, local discussions and drama performances. They all serve to enhance the news reporting, talk shows and public service announcements.

From 1999 to 2002, Britain’s Department for International Development (DFID) fully backed the use of persuasive radio programmes to urge rebels to abandon fighting. DFID funded the establishment of Mega FM radio in Gulu. The station went on air in August 2002, covering parts of Uganda as well as of southern Sudan and eastern DR Congo. It broadcasts general information on conflict and development as well as specific items geared to conflict resolution and promoting the peace process in the region.

Over 22,000 child soldiers and commanders responded to the appeal and abandoned the rebellion, significantly weakening the LRA. In short, the LRA conflict could only be ended after the intervention of peace journalism.
Today, the LRA has retreated into the Central African Republic. The Ugandan army is still using the come-back-home radio format, as Innocent Aloyo, host of Mega FM’s Kabake programme, reports. The host is flown into the CAR to interview child soldiers there.

Since the LRA was defeated in Uganda, local community radio stations have been reaching out to the public through peace reporting with a focus on development. The next crucial step is for media houses to adopt in-house policies and guidelines. Many radio hosts in rural areas are not aware of what peace journalism requires, and even some who are aware have proven unable to handle people who call in by phone to incite hatred.

International agencies that promote media development such as Internews and DW Akademie have trained hundreds of local journalists in peace reporting. The impact of trainees on the peace process has been assessed. A number of community radios were set up with a commitment to peace journalism and are still active today.

Today, the sensitive issue in Uganda is reporting about refugees. Even though the country hosts thousands of refugees, the matter is under-reported. The point of view of the refugees is rarely included. When Chris Obore, a well-known journalist, highlighted the plight of a Burundian refugee girl, his reporting changed the girl’s life for the better.

Peace journalism must give marginalised people a voice. Moreover, these efforts must transcend national borders. Since refugees from South Sudan, the DRC and other countries live in Uganda, conflicts spread to the border region.

It therefore makes sense for Ugandan and South Sudanese journalists to cooperate on covering refugee issues. Speak FM, a small community radio in Gulu, is doing just that. Station manager Jane Angom says that “exiled South Sudanese journalists contribute important information about the refugee community in northern Uganda, which our radio otherwise would not be able to access”. Language matters, after all.

In 2005, the media were a key player in the Juba peace talks that led to the signing of a cessation of violence and hostilities agreement (CPA) in South Sudan. Traditional leaders who were active in the peace and reconciliation efforts point out that peace journalism as a tool was “useful in mobilising people and reaching out to rebels”.

Professor Steve Youngblood heads the Center for Global Peace Journalism at Park University in Missouri in the USA. He says that “the best thing Ugandan journalists can do for their country is to promote peace, not inflame passions and hatred, by seeking to present accurate and impartial news”. In his experience, good reporting reduces conflict. He maintains that peace reporting is in line with “the principles of good journalism”.