In late March 2015, Saudi Arabia, supported by nine allies, launched a military campaign in its southern neighbour Yemen. The invasion has not fulfilled its official purpose of bringing the ousted Yemeni President Abdrabbuh Mansur Hadi back to power. Instead, it has pushed the poorest Arab nation to the brink of famine. 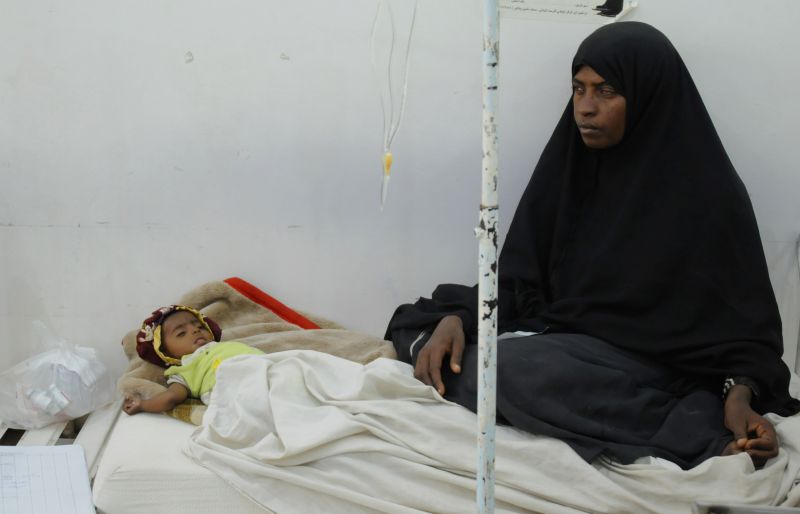 picture alliance/Photoshot The war in Yemen causes a humanitarian crisis: a mother sits by her malnourished child at a therapeutic feeding centre in Sanaa.

On the second anniversary of the beginning of the war, tens of thousands of people took to the streets of Yemen's capital Sanaa. They protested against the Saudi-led military campaign and called for an end to the civil war that has left more than 10,000 dead and 40,000 wounded. Today, some 10 million (80 % of the population) are in urgent need of humanitarian assistance, according to the UN. An estimated two million Yemeni children are about to starve.

The Iran-backed Shia Houthi insurgents, whom the predominantly Arab intervention is trying to oust, still control the western part of Yemen, including Sanaa. The war seems to have reached a stalemate and become one of attrition. Its political, humanitarian, security and financial costs are growing. Reports suggest that Riyadh spent $ 5.3 billion on the war only in 2015. According to Reuters, airstrikes alone cost Saudi Arabia approximately $ 175 million a month.

Against this backdrop, the question is why Riyadh persists unabated with the military campaign in Yemen. For starters, it is fundamentally an "affective" or emotional war driven by the Kingdom’s frustration about its regional decline, while its archrival Iran is a rising power with growing influence. The military action was launched in the thick of multilateral nuclear negotiations between Iran and world powers during the second term of former US President Barack Obama. The Saudis accused the USA of letting them down in favour of achieving a rapprochement with a resurgent Iran.

While the Houthis may pose a potential threat to the Saudi national security, they had neither declared war on Riyadh, nor did they have any evident intention of taking Yemen's civil strife to Saudi territory. The Saudi intervention is thus not an act of self-defense. It serves to display strength, fury and frustration with the existing state of affairs in the wider Middle East. It is also deeply cynical, as Saudis are seen to deliberately bomb civilian targets such as factories and even funerals and hospitals. Riyadh is not following Israel’s example of containing threats from the Gaza Strip through aerial and naval blockage.

Moreover, the invasion of Yemen was meant to boost the sense of Saudi nationalism and the popularity of the Royal House of Saud in view of vast economic, social and political problems at home. Notably, the Kingdom faced a budget deficit of $ 38.7 billion in 2015 and was forced to sell off 13 % of its $ 9.2 billion holdings in European firms. At the same time, it resorted to austerity policies in the public sector.

On an international level, the intervention has helped to reaffirm Saudi leadership in the Arab world, particularly in Sunni-majority countries. In countries that have large shares of Shias, such as Syria, Iraq and Yemen, however, the Saudi government wants to stem the influence of Iran. Houthi advances in Yemen damaged Riyadh’s perception of its position in the world, producing a sense of “ontological insecurity”: uncertainty and anxiety about its identity and status.

The Saudi-led coalition’s persisting war in Yemen seems to be intended to draw attention to their nemesis Iran's “expansionist” activities. Saudi diplomats around the world have taken great pains to demonstrate that Tehran and its non-state allies continue to remain a source of international insecurity and instability and therefore need to be confronted head-on. To some extent, the regime certainly feels reassured by the recent US air strikes in Syria and the Trump administration’s new insistence that there can be no peace with Shia-backed President Bashar al-Assad.

With these factors in mind, the end of the war and the resolution of the Yemeni crisis depend to a considerable extent on a thaw in relations between Iran and Saudi Arabia. The adoption of policies to recognise the latter’s regional status might pave the way for it.

Maysam Behravesh is a PhD candidate in the Department of Political Science, Lund University, Sweden, and a regular contributor to Farsi-language media outlets including BBC Persian.
maysam.behravesh@gmail.com