Cattle in the cassava field

Desperate herders terrify Nigerian farmers. In lack of traditional pastures, they drive herds into fields for feeding and they tend to become violent when challenged.

last contributed to D+C/E+Z in spring of 2018 as senior correspondent at THISDAY Newspaper in Abuja, Nigeria. 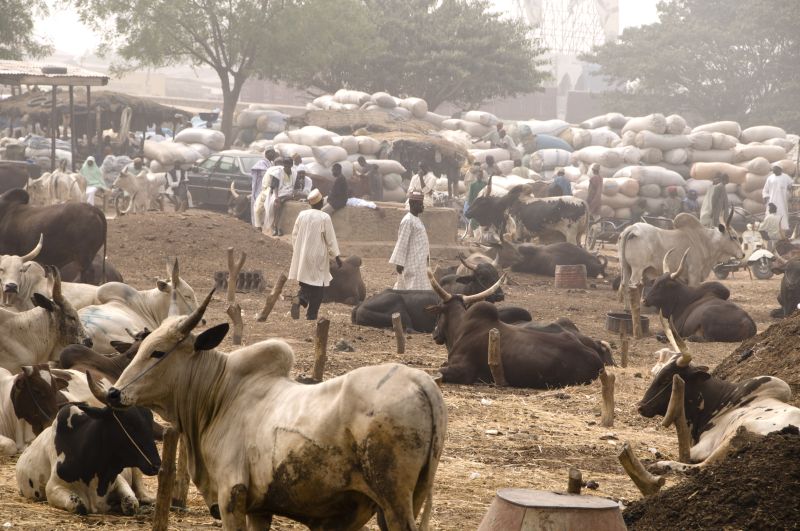 MARK SHENLEY/Lineair Pastoralists depend on water resources too: livestock market in Kano State.

Charles A. (name changed) was looking forward to harvesting the cassava on his farm in Gwagwalada near Abuja, Nigeria’s capital city. He had already concluded an agreement with a company that wanted to buy the cassava, make pellets for livestock feed and export them to other countries. As a sign of good faith, the company had paid Charles some money.

On a hot afternoon in February 2017, however, Charles got a call that herds of cattle were in his cassava farm, eating up the plants and stems. He rushed there, and wanted to confront the herders. His farm workers held him back. They knew that the situation was dangerous and might escalate into deadly violence.

“I watched them destroying my fields; I am now in debt.” The farmer expressed deep frustration that something like this could happen. “We called the police, but they told me they were not equipped to handle cattle, and they even advised me not to fight with the herders, so they would not hurt me.” Some herdsmen are known to be armed. Charles’ loss amounts to the equivalent of about $ 32,000.

“The government is pushing young people like me to invest in agriculture instead of seeking white collar jobs,” he says. “We talk about attaining food sufficiency in Nigeria by the end of 2017.” He does not think he is getting the support he deserves.

To Nigerians, his story sounds all too familiar. In many parts of the country, herdsmen drive  hungry herds onto fields, and again and again, they kill farmers who dare to challenge them.

The nomadic herders are desperate themselves. They need pastures and water for their animals, but such resources are becoming scarce in the regions they traditionally roam. They also have to defend themselves and their cattle from reprisal attacks and cattle thieves. The problems are most pronounced near Lake Chad, a slowly disappearing water body.