The concentrations camps, which the German colonial power operated from 1904 in the region of what is Namibia today, were predecessors of the extermination camps of the Nazi regime. The colonial camps were characterised by selection, forced labour and “medical” experiments to prove racist theories.

contributed to D+C/E+Z in autumn 2017 as political scientist at the department for development and postcolonial studies at the University of Kassel. He is active in the organisation „Berlin Postkolonial“ and lives in Berlin. 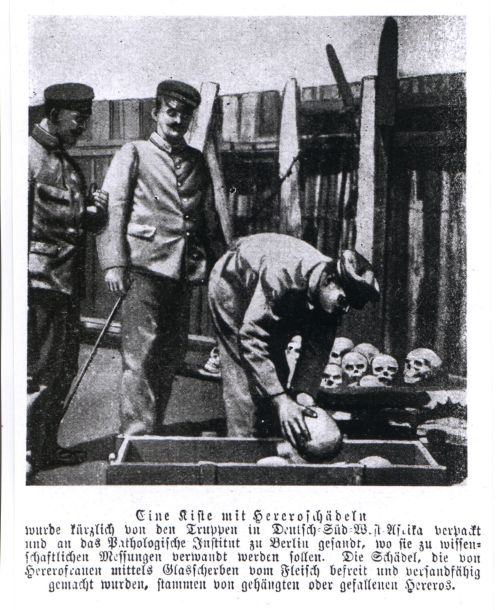 In German South West Africa, men, women and children were brought into the concentration camps. Life and death in these camps were marked by forced labour as well as bad conditions and insufficient supplies for the interned. There are direct political, ideological and personal connections to National Socialism. Eugen Fi­scher, for instance, investigated in the colonial Namibia about the offspring of European settlers and Africans, the so-called “bastards”; in the Nazi state, he later became a pioneering mastermind on racist policies. In a way, the German colonies were laboratories where extreme acts of racist violence were tested.

For racist investigations, thousands of skulls were shipped from the German colonies to the “Reich” – also from the concentration camps of German South West Africa. Today, many can still be found in collections of German universities and museums, or privately owned. Herero and Nama organisations demand their restitution.

When in late 1904 the German colonial powers established “concentration camps” in German South West Africa, they acted according to a model from South Africa. Three years earlier, “concentration camps” were put up in order to intern the families of freedom fighters of Dutch origin who wanted to declare their independence from the British Empire and founded their own state. This strategy led to the breakdown of the Boers’ resistance. (jka)