A growing share of Brazil’s people are obese. Healthier diets would help, but eating habits are not easy to change. 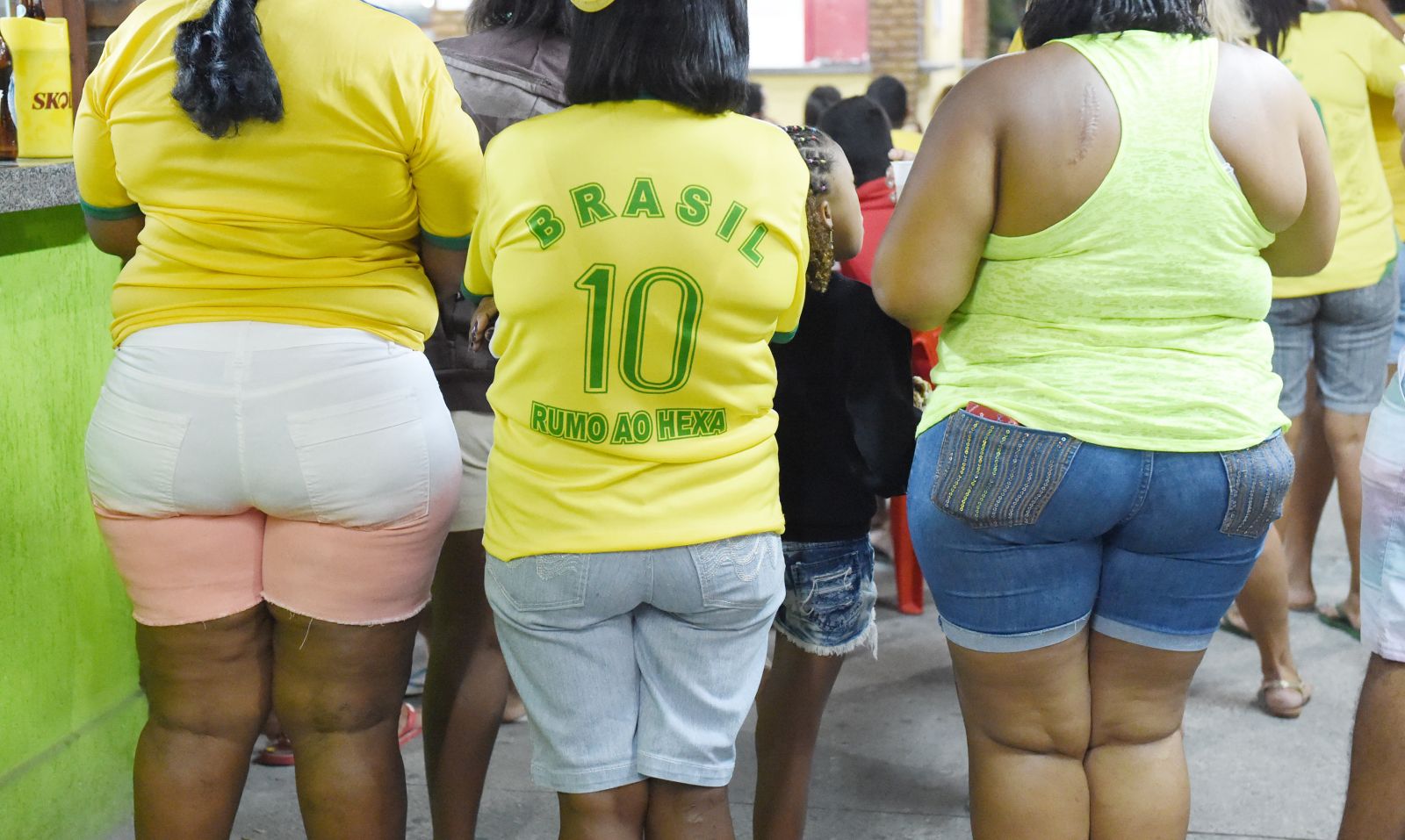 picture-alliance/GES-Sportfoto Ever more Brazilians are overweight: football fans in Porto Seguro in 2014.

In 1996, 12.7 % of Brazil’s adult population was obese. In 2016, 20 years later, that share had almost doubled to 22.1 %, according to statistics of the OECD (Organisation for Economic Co-operation and Development).

Obesity does not simply mean that someone is overweight. It means that a person has so much body fat that it is likely to affect a person’s health. Associated complications include hypertension, heart attacks, strokes, cancers, diabetes and joint problems. Depression and sleep problems are common too. The World Health Organization (WHO) considers persons to be obese if their body-mass index is 30 or more. A body-mass index of 25 means a person is overweight.

Brazil’s Ministry of Health released a survey this year. Results included that 25.4 % of adult women and 18.5 % of men are currently obese. Moreover, more than half of the adult population is overweight. It is considered to be particularly worrisome that evermore young people are affected. In the age groups of 25 to 34 years and 35 to 44 years, the problems are increasing particularly fast. One in three Brazilian children was overweight in 2019, according to Sisvan, the national government’s food and nutrition surveillance system.

The Ministry of Health runs a surveillance system called Vigital which monitors chronic diseases. The data show that 7.7 % of the adult population has diabetes and 24.7 % has hypertension. These chronic conditions are often linked to excessive weight. The National Health Survey (PNS) indicates that among adults with diabetes, 75.2 % are overweight. The figure for adults with hypertension is 74.4 %.

These health problems are linked to people’s lifestyles. The wrong kind of diet and too little exercise make them more prevalent. Excessive consumption of sugar, carbohydrates and saturated fats is unhealthy. However, such consumption is promoted in advertising for pre-processed food or sweets, for example. Children and adolescents are targeted in particular.

Brazil’s data reflect international trends. The WHO speaks of a “global obesity epidemic” and warns that “’globasity’ is taking over the world”. International experts agree that it is not just a matter of individual choices. Political, economic, social and cultural factors are relevant because those factors influence people’s decisions and form their habits. According to the WHO, the big policy challenge is to make healthy choices easier.

Brazilian authorities want to stop the trend towards ever worsening obesity. That was made explicit in the National Food and Nutrition Security Plan (Plansan) for the years 2016 to 2019. It was adopted by the centre-left government of President Dilma Rousseff. Among other things, the goals were:

The implementation report published in 2018 showed, however, that almost 90 % of the government’s efforts served promoting universal access to adequate and healthy food, with priority for families and people in situations of food and nutritional insecurity. Government action thus specifically targeted people in situations of poverty, including extremely poor families and the elderly. The health dimension was not paid much attention. The background is that Brazil suffered a severe recession in recent years, and poverty has grown worse. About 6.5 % of the people were reckoned to be living in extreme poverty at the end of 2019.

There were administrative reforms, moreover, which ultimately meant that Plansan was discontinued under the current President Jair Bolsonaro. The government is not planning to launch a new plan for the years 2020 to 2023, even though civil-society organisations have shown interest.

The Covid-19 crisis is currently compounding problems. In normal times, about 40 million kids in public schools depend on school meals. Such meals were not available during the lockdown. The Bolsonaro government has, however, authorised exceptional food provisions to parents and guardians of students concerned, channelling revenues to food producers, including smallholder farmers, as a side effect. The politically important issue, in the eyes of the right-wing government, is to be seen as fighting hunger and promoting agriculture rather than tackling more complex health challenges.

The president's response to the pandemic has largely been downplaying (see my contribution in Covid-19 diary of D+C/E+Z e-Paper 2020/06). Lockdowns were imposed by sub-national governments at state and municipal levels. By mid-October, the website Worldometer had counted almost 5.2 million infections and more than 150,000 dead in Brazil. Only the USA had seen more people die of this disease.

Brazil’s economy too has been hit hard by Covid-19. By the end of this year, the World Bank expects the number of extremely poor people in our country to rise to almost 15 million, so their share would increase by more than half.

On the upside, many Brazilians are paying attention to health matters. The interest in related information and lifestyles is growing. Not quite 40 % of Brazilians exercise in their free time, for example. Many of them know that healthy nutrition contributes to physical fitness. Of course, balanced and diversified diets are good for people who are not amateur athletes too. Awareness of these things is growing, says Monyke Lopes, a health practitioner who specialises in nutrition, though some people still remain ignorant.

Food choices, moreover, are complex, she points out. The socio-economic status matters very much. As Lopes argues, people with low incomes often cannot afford to eat well. Healthy food items – organic vegetables and fruits, for example, – tend to be expensive. The same is true of protein-rich food such as lean meat or fish. To a large extent, poor people’s diets consist mostly of carbohydrates plus some sweets that they consume as treats. On the other hand, working mothers tend to lack time for cooking and therefore provide their families with pre-prepared meals and fast food, both of which typically include much sugar, salt and fats.

Obesity in children and adolescents is particularly worrisome. They are likely to get stuck in habits that make them obese, and the earlier a person becomes obese, the sooner they are likely to experience the negative health impacts.

There is reason to worry in all countries. According to research done by the WHO in cooperation with Imperial College London in 2017, the number of obese children and adolescents (aged five to 19) has increased tenfold in the past four decades. The study warned that, if current trends continue, there will be more children and adolescents with obesity than with moderate and severe malnutrition by 2022.

Lopes says that Brazilian children today live rather sedentary lives, watching a lot of TV and using their cell phones. Fast food is popular in this age group, but its members do not eat enough vegetables. In her eyes, it is no surprise, that half of her patients want to lose weight and/or need treatment for chronic disease. The nutrition expert regrets that children are not taught about health and good diets at school.