There are many obstacles to the global containment of the Covid-19 pandemic. Intellectual property is a very fundamental one. Instead of finally addressing this issue in the current health emergency, many actors in business and politics steadfastly refuse to accept any relaxation of patent protections. Many people die every day, especially in the global south, as a direct consequence of patent enforcement.

last contributed to D+C/E+Z in summer of 2021 as s a political scientist and member of the BUKO Pharma-Kampagne team.

last contributed to D+C/E+Z in summer of 2021 as a sociologist and public health scientist. He has worked for the BUKO Pharma Campaign since its inception. 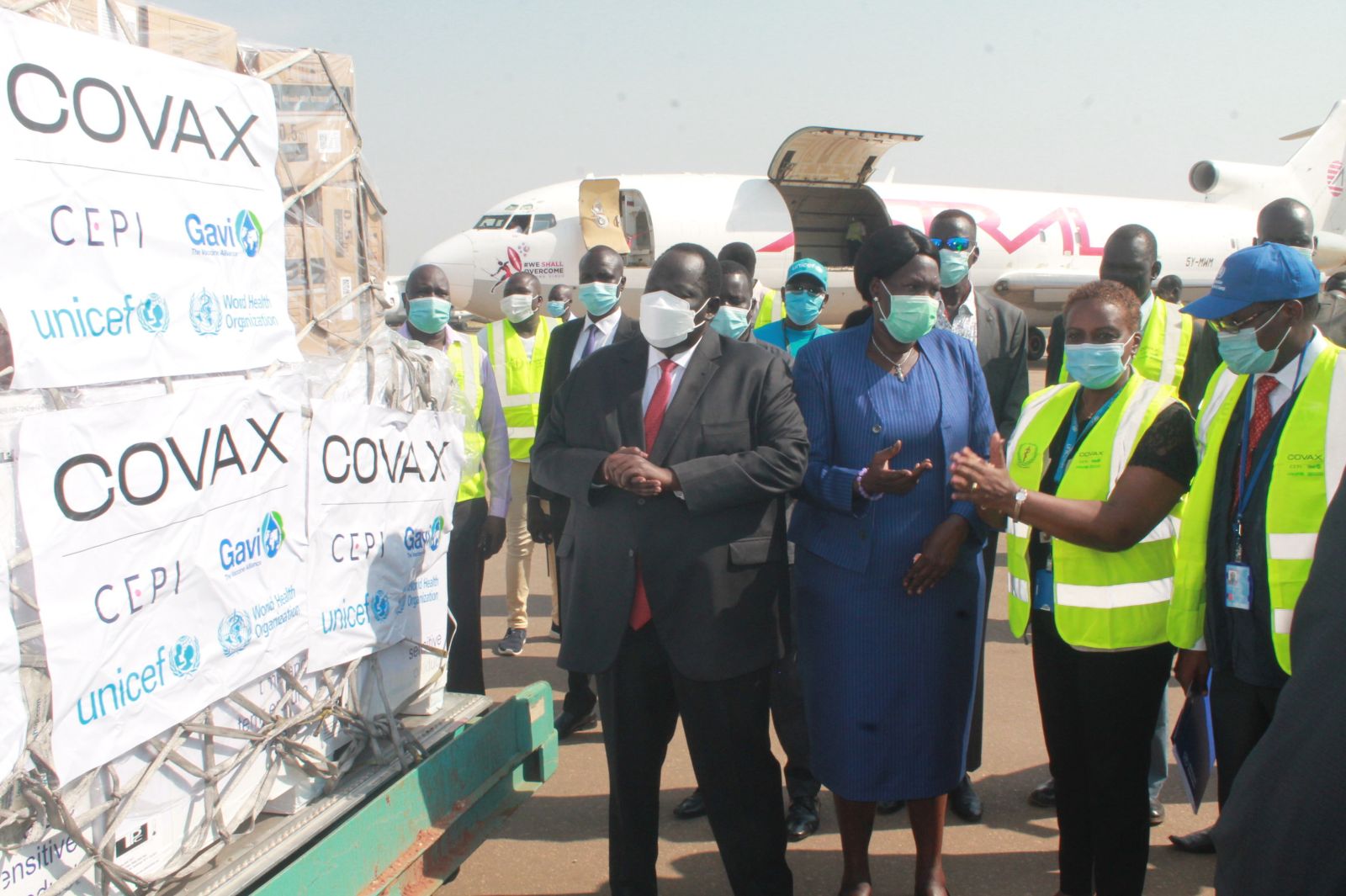 By early May, 1.1 billion doses of Covid-19 vaccine had been administered worldwide. Four-fifths of those vaccinations happened in high or upper-middle-income countries and just 0.3 % in low-income countries. As early as January, Tedros Ghebreyesus, the director-general of the World Health Organization (WHO), warned: “The world is on the brink of a catastrophic moral failure – and the price of this failure will be paid with lives and livelihoods in the world’s poorest countries.”

The prevailing shortage of vaccines is not an unfortunate coincidence; it results from political decisions to protect intellectual property (IP). In medicine, IP includes know-how, industrial design, cell lines and clinical data as well as patents for active ingredients.

In theory, patents reward innovative researchers and companies with temporary monopolies. They are only a means to an end. In practice, however, the patent system leads to:

Patents are thus less the driving force of innovation than a tool for profit maximisation. They contribute to a legal environment that serves pharma companies’ interests. Accordingly, this industry defends them with all means at its disposal.

At the end of last year, Albert Bourla, the chief executive officer of Pfizer, called intellectual property “the blood of the private sector”. What he failed to mention is that, in the field of medicine, progress often is based on government-funded research. Private companies often receive direct financial support from governments, so they rely significantly on the public purse. That is true in regard to Covid-19 too.

In 2020, the Pfizer management boasted that the corporation had received no state funding for the development of the Covid-19 vaccine. It did not point out, however, that its German partner company Biontech – which made by far the largest contribution to the development of the vaccine – received substantial funding from the German government. Indeed, Pfizer only entered its joint venture with Biontech in March 2020. Pfizer recently raised its ­Covid-19 vaccine sales forecast for 2021 to $ 26 billion.

Since the beginning of the pandemic, governments around the world have channelled billions of euros to private actors – in the form of research grants, subsidies for boosting production capacities and guaranteed vaccine purchases. Experts bemoan, however, that the governments failed almost entirely to ensure people’s equitable access to Covid-19 vaccines. Rules are needed, and the proper occasion for defining them is when agreements on financial support are concluded.

Instead, manufacturers such as Moderna and Pfizer/Biontech have used their market dominance to set arbitrary vaccine prices and develop production capacities as they saw fit. The consequences are devastating: rich countries and the EU bought up the scant global vaccine supply, leaving the global south empty-handed.

Though heads of state and government such as German Chancellor Angela Merkel and French President Emmanuel Macron have declared on many occasions that vaccines are a “global public good”, tangible policies did not show it. Macron may lately have sided with US President Joe Biden in his surprising support for a temporary suspension of patent rights, but he was quick to point out that such a move would not solve the real problem.

The global north’s insistence on intellectual property during the pandemic is not simply wrong in moral terms. It does not even make sense in terms of self-interest. While countries like the USA and Canada secured vast vaccine quantities, Sars-CoV-2 continued to rage through countries such as Brazil, the Philippines and most recently India. As a result, mutations have emerged and are spreading around the globe.

Governments of vaccine-producing countries are exploiting the desperate situation of many other countries in the pursuit of diplomacy goals. Those seeking to extend influence by delivering vaccines include Russia, China, the EU and India. In view of its own catastrophe, however, India temporarily stopped exporting vaccines.

On the other hand, global mechanisms were hastily created in 2020 to mitigate some of the deadly side-effects of vaccine nationalism, but they have only had little or no effect so far. The global north continues to see the so-called Access to Covid-19 Tools Accelerator (ACT-A) as the fail-safe way to accelerate the development, production and equitable distribution of Covid-19 pharmaceuticals, including tests, treatments and vaccines. Civil-society organisations disagree. They are particularly critical of ACT-A’s COVAX (Covid-19 Vaccines Global Access) facility, which is supposed to ensure equitable access to vaccines worldwide.

The distribution of vaccines under the COVAX scheme is totally inadequate. From the outset, the plan was to cover a mere 20 % of partner countries’ populations – and the time-frame for meeting even that modest target remains obscure.

The core challenge is that production capacities are not fully made use of. A patent pool called C-TAP (for Covid-19 technologies) could not make a difference yet. It was established by the WHO last spring, but remained idle for months. The group of 40 countries that made commitments to the pool did not grow for a long time. Most industrialised nations and Big Pharma actively boycotted or ignored the pool from the start, so it was not granted any IP rights for Covid-19-vaccines or treatments. It seems bizarre that now, one year later, we are once more discussing the hurdles of IP rights and the need for technology transfer. A restart of C-TAP is planned and might include more member states. Whether it will deliver results, remains to be seen.

There is certainly a shocking gulf between the necessity of a patent waiver and the current status quo. India and South Africa first demanded the IP waiver from the World Trade Organization (WTO) in October 2020 (see interview with Achal Prabhala in the Focus section of D+C/E+Z e-Paper 2021/06). The two countries proposed to temporarily suspend all IP rights for any product relevant for preventing, containing or treating Covid-19.

This proposal has been stuck at the WTO level for half a year even though it is co-sponsored by 62 countries and enjoys the support of over 100 WTO members. Governments that oppose this step – they almost exclusively run countries with powerful pharmaceutical industries in the global north (including Germany) – claim that IP is not a hurdle in the fight against Covid-19. Moreover, they even argue that the waiver is unnecessary since WTO rules already allow national governments to grant compulsory licences in health emergencies.

The first claim is simply not true, as ample evidence shows. The issuing of compulsory licences, however, is time-consuming and inadequate. Moreover, many governments that now suggest that it is the way forward are guilty of hypocrisy. In the past, they did what they could to torpedo such attempts. In the meantime, the rhetoric has shifted to claiming that the global ­south lacks the ability to manufacture Covid-19 vaccines. Apart from the paternalistic nature of such a claim, it is quite obviously wrong.

Indeed, India has a strong vaccine-producing industry, and so do other countries. South African and Indian WTO diplomates did a survey and the results showed that countries of the global south would be able to produce an additional billion vaccine doses per year– if only they were given the right to do so.

In this context, EU Commission President Ursula von der Leyen sounds cynical when she boasts that the EU is the largest exporter of Covid-19 vaccines. The full truth is that dependence on the industrialised countries of the global north is the rest of the world’s biggest problem. Of course, technology transfer is important to expand manufacturing – not only in regard to Covid-19 but for anticipated future pandemics as well. Moreover, it would be in line with the aim of building global partnerships, which is the UN’s 17th Sustainable Development Goal (SDG).

The current deadlock brings back un­pleasant memories. When HIV/AIDS emerged as a disease in the 1980s, pharma companies initially showed little interest in developing drugs to fight it. Therefore, five of the first six active ingredients were discovered in the laboratories of universities or state-run institutes. By 1999, 58 % of research on HIV drugs was government-funded, and the rest was done by commercial firms or by universities without specific government subsidies. Only in 1996, when it became clear that combination therapy could protect infected people from getting full-blown AIDS, did the pharmaceutical industry become involved on a larger scale.

It focused on the relatively small group of HIV-positive people in prosperous nations, setting the price of treatment at around $ 10,000 per patient and year. More than 90 % of those needing the therapy lived in poorer countries. For a decade, the vast majority of sufferers were denied access to life-saving treatment. The turning point came only with the advent of the patent pool for HIV drugs. Even it was only established after the WTO accepted the principle of compulsory licensing in 2001, thus considerably weakening the industry’s negotiating position.

The traumatic experiences of the HIV/AIDS pandemic recur not only when it comes to Covid-19 or other infectious diseases like drug-resistant tuberculosis. Intellectual property rights also keep equitable care out of reach for many patients who suffer from non-communicable diseases such as cancer (see box).

Astonishingly, many political actors still pretend that patents are not part of the problem, but part of the solution – even in this pandemic. That position is irresponsible and totally reckless.

Max Klein is a political scientist who works for the non-governmental BUKO Pharma-Kampagne, which has been fighting for the human right to health since 1981.
info@bukopharma.de

Jörg Schaaber is a sociologist and public health professional working for BUKO Pharma-Kampagne.