According to the World Health Organization (WHO), 1.5 billion people worldwide need treatment for neglected tropical diseases (NTDs) like schistosomiasis or African trypanosomiasis. Eradicating them requires more than medication however. 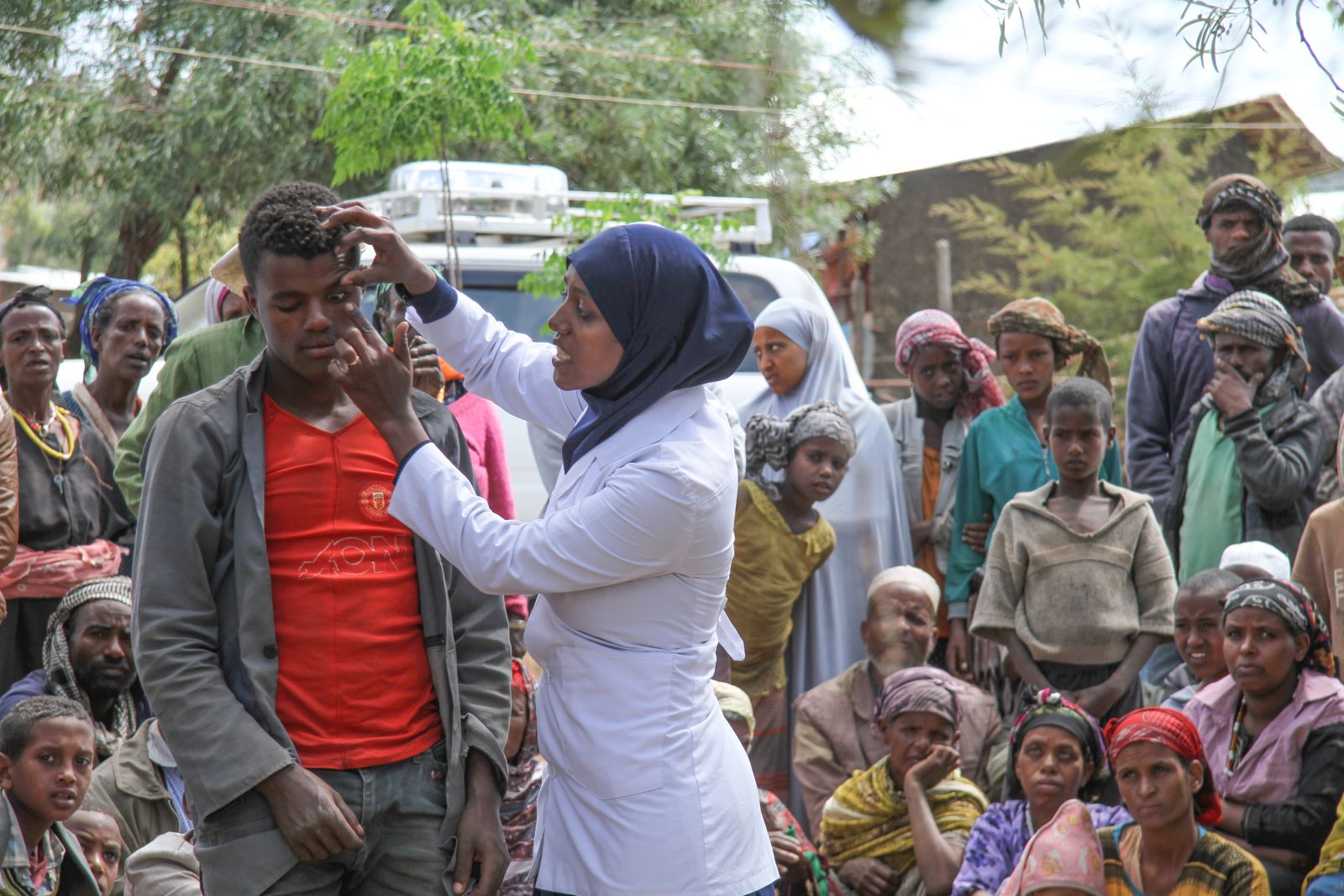 kd Mobile health workers educate rural villagers in Ethiopia on trachoma, a disease caused by bacteria that leads to a loss of eyesight if left untreated.

Schistosomiasis is caused by parasitic worms and affects 240 million people worldwide. More than 700 million people live in areas where it is endemic, according to the WHO. The disease is spread via contaminated water.

It can be treated with tablets that kill the worm, but the medication is not approved for children under the age of six. Jutta Reinhard-Rupp, who heads the German pharma corporation Merck’s Global Health Institute, is part of a consortium that wants to change matters by developing a new formula of the medicine Praziquantel. A smaller, better-tasting tablet would be suitable for children and boost compliance in general.

All too often, however, people who received treatment go back to bathing in the same contaminated river, Reinhard-Rupp says, adding: “Medication is not enough, we also need to invest in awareness and prevention.”

NTDs are a group of diseases caused by viruses, bacteria, protozoa and parasitic worms that mostly affect poor people in Africa, Asia and the Americas (see interview with Martin Kollmann in D+C/E+Z e-Paper 2018/03, p. 28). They never got the same attention as diseases that affect rich nations. Moreover, the UN considered the fight against HIV/AIDS, tuberculosis and malaria to be more important. Accordingly, only scant funding for prevention and research was committed to NTDs. Between 2000 and 2011, only four percent of the 850 new drugs approved worldwide were indicated for an NTD.

Non-profit organisations like the Drugs for Neglected Diseases initiative (DNDi) are trying to fill the gap. With donor support, DNDi is developing new pharmaceuticals. Together with Sanofi, a pharma giant, DNDi has been working on a treatment for African trypanosomiasis or “sleeping sickness”. The new drug has been tested and is currently being evaluated by the European Medicines Agency. “We believe it will contribute to the elimination of the disease,” says Graeme Bilbe, research and development director of DNDi. “Results like these can be achieved by setting ambitious goals and bringing together stakeholders like governments, researchers, pharmaceutical companies and generics producers.”

In the eyes of Thomas Gebauer of medico international, an international non-governmental organisation, the neglect of NTDs is a result of the intellectual-property laws: “The patent system allows pharmaceutical companies to inflate prices so they focus research on well-off patients who will pay high prices.” Innovation in other fields is thus stifled. “Competitors try to gain access to lucrative markets, so they develop slightly altered versions of existing drugs and have them patented.” Gebauer says that 50 % of newly developed drugs do not make health-care systems stronger. He argues that a publicly funded research pool would be best suited to address the issue. More­over, civil-society organisations are putting pressure on companies, governments and international organisations. Such action, Gebauer points out, helped to make anti-retroviral AIDS treatments affordable in developing countries.

Medication is only one part of the puzzle however. “Neglected diseases are neglected patients,” Franz von Roenne, a GIZ expert on global health, said at a public event organised by his agency and local media in Frankfurt in August. Poor infrastructure, mismanagement and corruption mean that many people do not get access to pills. With the support of GIZ, Cameroon has set up regional funds for health promotion to facilitate decentralised pharma distribution, involving community representatives at the grassroots level even in rural areas.