Venezuela on the brink

In the past year, the crisis in Venezuela has gotten worse across the board. Hyperinflation, trends towards a military dictatorship and a humanitarian emergency dominate the lives of the people – and that has international implications.

last contributed to D+C/E+Z in winter 2017/2018 as executive director and researcher at the Venezuelan Institute for Social and Political Studies (INVESP). 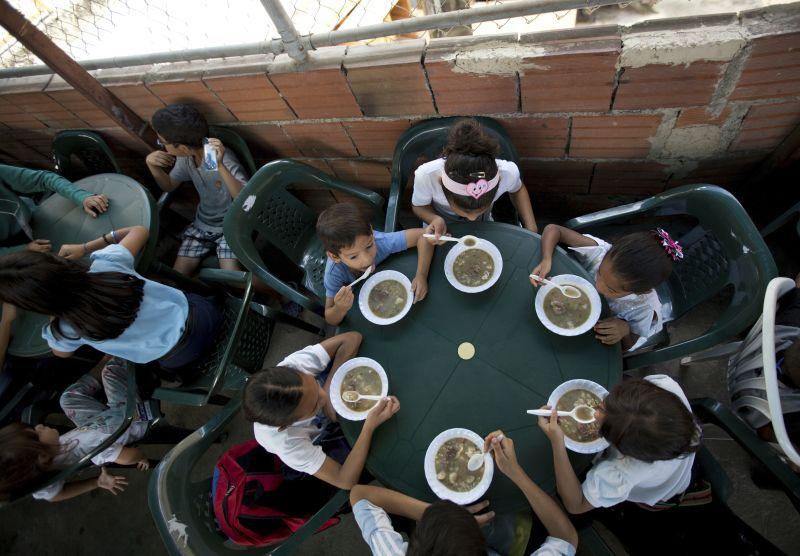 Llano/picture-alliance/AP Images Children receiving a free meal at a soup kitchen in Caracas funded by the opposition.

Venezuela has been unable to meet all of its international payment obligations since hyperinflation began in October. Politically, it is moving closer and closer to a dictatorship, with the military becoming ever more powerful. The people are suffering a humanitarian crisis due to a shortages of food and medication. Other serious bottlenecks are evident in health care moreover (see my comment in D+C/E+Z).

The situation has international consequences. On the one hand, the number of migrants has risen sharply, and the impact is felt in particular in the border areas near Venezuela, Colombia and Brazil, as well as in other countries in the region. On the other hand, the international community is exerting increased pressure on the government of Nicolás Maduro, which it perceives as a dictatorship that is openly violating human rights. Because of such pressure, parts of the opposition are now negotiating with the government, though it is completely unclear where these talks will lead.

While inflation already stood at over 2,600 % in 2017, it is expected to hit anywhere between 5,000 % and 10,000 % in 2018 if no economic countermeasures are taken. Oil production has declined as a result of poorly maintained facilities and a lack of new investments. The entire sector has virtually collapsed. Since oil makes up about 95 % of the country’s exports, the government has fewer and fewer resources at its disposal.

As of November, the government and the state-run oil company PDVSA have been unable to service their external debts on time, if at all. Important international financial institutions consider the situation in Venezuela a partial default and predict that things will get even worse this year.

The sanctions that the US and Canada imposed against public officials and certain transactions have provided the government with a perfect excuse. It calls the measures “economic warfare”, painting itself as a victim. A first set of EU sanctions was introduced in January. Travel bans were imposed on seven members of the government, the National Electoral Council, the Supreme Court and the Constituent Assembly and their assets frozen.

The economic crisis has had enormous consequences for the lives of people all over the country. Due to the lack of food and pharmaceuticals, the quality of life has deteriorated dramatically. Then came inflation. The Encovi (Encuesta sobre Condiciones de Vida en Venezuela) survey, conducted by the leading independent universities in Venezuela, found that in 2016, 82 % of all households were poor and 52 % were extremely poor. The survey also revealed the extent of malnutrition: 72 % of respondents reported unwanted weight loss and 30 % claimed to eat merely twice a day or even less.

Moreover, social inequality has sharply increased. All relevant indicators show the extent to which the crisis worsened in 2017. Poverty and malnutrition, particularly among children, are on the rise, and deaths from starvation and medication are increasing.

Accusations of election fraud in all three of last year’s elections provide the clearest illustration of the political decline the country has experienced in the past six months. Grave doubts were cast on the democratic legitimacy of those in power. The trouble began with the election of the members of the Constituent Assembly. The opposition did not take part in the election and therefore criticised it as unconstitutional.

According to the top election authority, over 8 million people cast their ballots in the Constituent Assembly election, but the opposition thinks that number is much smaller. Voter turnout has never been that high, not even during the best days of Hugo Chávez, the previous president. Smartmatic, the company that provided the voting machines and software since 2004, confirmed that the results were manipulated.

The majority of opposition parties took part in the gubernatorial elections on 15 October. However, they complained of a number of irregularities, most of which have been accurately documented. The surprising result was that 18 governorships went to the ruling party and only five to the opposition.

Based on the accusations of election fraud, which also concerned the misuse of a specially issued pro-government ID – Carnet de la Patria – by the ruling Partido Socialista Unido de Venezuela (PSUV), the oppositional alliance Mesa de la Unidad Democrática (MUD) decided not to take part in the December mayors elections. Consequently, the ruling party took power in the overwhelming majority of municipalities.

The dominance of the governing party, coupled with election fraud, have led to increasing political apathy among the opposition. The opposition leaders who founded the “Soy Venezuela” alliance in September have openly encouraged such disenchantment. However, it seems that the government is strategically trying to undermine trust in the electoral system and divide the opposition.

Another important factor is the conduct of the Constituent Assembly. It has declared itself to have full powers and has assumed important jurisdictions. It has also become an instrument of political persecution, starting with the unlawful removal of the attorney general, who was replaced by a functionary with close ties to the government.

As of the end of 2017, the Assembly’s greatest achievement was charging the leaders of the state-run oil company with corruption. Venezuela’s current government is indeed considered to be the most corrupt that the country has ever had. The recent allegations may however stem from an internal conflict within the ruling party rather than a genuine desire for justice.

Even though the Constituent Assembly does not officially have the power to legislate, it nevertheless passed “a constitutional law against hate and for peaceful coexistence and tolerance”. This law opens the door to suppress opposition voices.

Another factor is the growing role that the military is playing in the most important areas of government. Over 30 % of the cabinet are either active or retired members of the military. The question has been raised whether Venezuela is becoming a new kind of military dictatorship.

The latest example of this trend is the appointment of a general from the Guardia Nacional Bolivariana – a branch of the armed forces – to head both the Ministry of Energy and the PDVSA. He has no knowledge of or experience in the oil business and is not qualified to lead the industry out of its current crisis. But in the power struggle among the ruling elite, he has paved the way for other members of the military to take over the country’s most important sector.

Pressure from the international community has set in motion a negotiation process that the government calls a “dialogue”. It is being moderated by José Rodríguez Zapatero, the former prime minister of Spain, and Danilo Medina, the president of the Dominican Republic. Upon request from the opposition, other participants include the foreign ministers of Chile and Mexico as well as representatives from Bolivia, Nicaragua and Saint Vincent and the Grenadines. According to reports, the agenda will address, among other things, political rights, political prisoners, the economic and social situation, the Constituent Assembly and the Truth Commission.

By mid January, several meetings had taken place, but the negotiating parties were unable to reach an agreement. It seemed extremely doubtful that the parties would agree on economic and political reforms that might lead to a reorganisation of the governing bodies and restore democracy to the country – especially given the humanitarian crisis.

The fundamental question is whether the main cause of the current situation can be traced back to divisions within Venezuelan society between those loyal to the government versus the opposition, or to a small elite that has abused its institutional and military power to keep its hands on the reins, despite the fact that the majority of the people want change.

Francine Jácome is the executive director of and a researcher at the Venezuelan Institute for Social and Political Studies (INVESP).
fjacome@invesp.org