The role women play in society has been constantly changing throughout history, so the way we see gender todays differs from how it was seen in the past. In her fascinating and funny play of 1974, “El Eterno Femenino”, Rosario Castellanos, a Mexican feminist, presented all sorts of prejudges about women. This contribution is part of our Summer special in which we recommend holiday reading in our In Brief section. By Franz Bertenbreiter 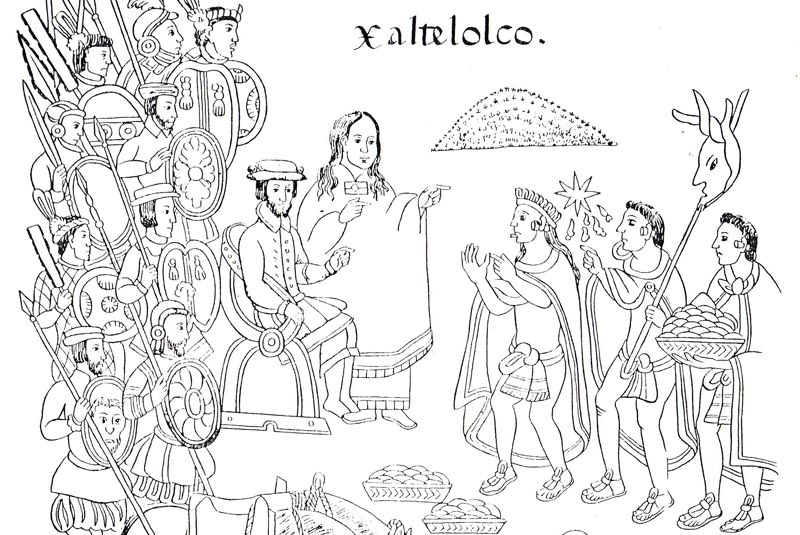 United Archives/WHA/picture-alliance La Malinche, the interpreter and lover of conquistador Hernán Cortés, is one of the many women who play a role in El Eterno Feminino.

Especially in Latin America, gender roles were – and still are – split. Men assumed a strong patriarchal role, whereas women were considered the “weaker sex” that cared for the needs of their families. The father is considered to be the breadwinner who earns money, while the mother is supposed to take care of the children and the home. As a result, men symbolise strength and women sensitivity. Eventually, women themselves began to believe in stereotypes of this kind.

Castellanos’ farce deals with these issues. It starts in a place commonly vi­sited by women: a beauty salon. A salesman tries to convince the owner of the salon to buy a new innovative machine. This artefact amuses customers by inducing dreams while it dries their hair. Lupita is the protagonist of the play. She is the Guinea pig with which the machine is tested. She wants to look beautiful for her wedding, which will take place in a few hours.

Lupita experiences all kinds of unpleasant dreams. She goes through every stage of a typical woman’s life in hyper­bole. First, she marries and lives with her husband. Next, she gets pregnant. Her mother advises her in every stage of pregnancy, telling her to follow the traditions she learned from her mother. The protagonist ends up being convinced of the correctness of these archaic thoughts. Eventually, she goes on to teach the same principles to her daughter, recommending her to drop out of school and dedicate her life to her husband, as Lupita did, because women live for their men. Years later, Lupita finds out that her husband is cheating on her and kills him. Her deed makes her famous, and people all over the world admire her for being an unconventional woman. She is lonely in old age, however, apparently because of her rebellious attitude. The dreams scare Lupita, and she wakes up angry.

Lupita’s hairstyle is not complete, however. As she still needs to dry her hair, she uses the machine once again. This time she sees a theatre where several important women are acting. This part of the play starts with the myth of the genesis, seen from Eve’s perspective in a satirical way. The persons appearing include Latin-American women of relevance such as la Malinche, the interpreter and lover of conquistador Hernán Cortés, Empress Carlota, the wife of Emperor Maximilian,  Sor Juana Ines de la Cruz,  a famous Mexican writer, and others. Each woman tells her story and explains why it is so important. This dream ends when there is a power blackout.

As Lupita’s hair is still not ready, she must wear a wig. She has a wide collection to choose from. Every wig represents a stereotyped woman at her finest. As Lupita wears them, she gets transported to different situations. She becomes a prostitute, then a married man’s lover, a famous scientist and so on.

Castellano’s play assesses the importance of women in society in a simple and funny way. The author believes in change, in real equality instead of sexism. She wants us to be aware of the injustice women have suffered for hundreds of years and invites us to make a difference. The only way to achieve change, however, is to abandon senseless traditions. Women and men are equal, so both deserve the same respect.