Social and community media are reliant on active participation. Therefore, training the youth in producing ethically correct media, but also consuming media in an appropriately critical manner is crucial. In Namibia, the Media and Information Literacy Learning Initiative helps to spread these skills.

contributed to E+Z/D+C in spring 2018 as the coordinator at the Media and Information Literacy Learning Initiative (Milli*). She lives in Windhoek, Namibia. 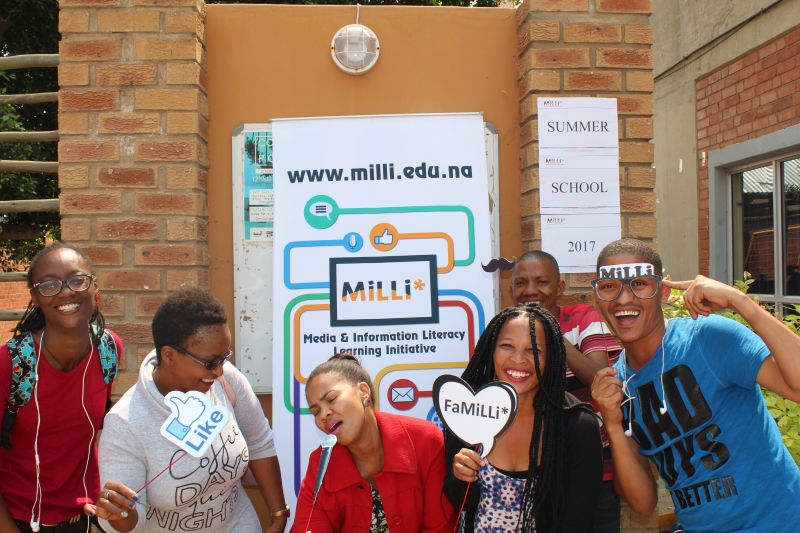 We live in a world of fast progress. Global media open opportunities to connect, communicate and exchange with audiences all over the world. Within a few seconds, messages can reach millions of people. Thanks to the internet, young people have ever better access to a great diversity of media.

But what good does it do to our daily lives if we are unable to truly decipher the messages because we don’t know what and who is behind media? Because we don’t know how to use the media responsibly? Because we cannot actively participate and fully tap the web’s potential? All progress and media development will only benefit us if we are able to analyse and manage it properly.

Namibia has media houses and skilled journalists, and it enjoys the freedom of press. Fifty five percent of the people are younger than 25. They will shape the future of the country. However, most of Namibian youths are deprived of gaining the skills that constitute media and information literacy (MIL), including an understanding of the ethics surrounding media use.

One initiative has begun to promote this cause. The Media and Information Literacy Learning Initiative (Milli*) was established in 2016 by the Media Arts Technology Studies (MATS) programme of the College of the Arts in Windhoek, Namibia’s capital. Milli* is supported by Deutsche Welle Akademie, an agency that works on behalf of Germany’s Federal Government. The aim is to make Namibian society media literate. Milli* educates local facilitators who subsequently share their knowledge and experience in projects all over Namibia. Joost van de Port, the head of the MATS programme, says that Milli* focuses on the urgent societal need for media education among young Namibians.

As a non-profit initiative, Milli* relies on a network of partners, including community radios and civil-society organisations at the local level as well as the National Youth Council of Namibia, the National Institute for Educational Development, the Ministry of Education and the Ministry of Information and Communication Technologies.

Among other things, the initiative organises the annual Milli* Summer School, a ten-day workshop in Windhoek. The target group is energetic youngsters from all over the country.

Founa Kazongominja took part last year. She is a volunteer with Base FM, a community radio. She says: “The Milli* Summer School prepared me for my role as a MIL youth project facilitator.” After the event, she organised “a music and sound youth project” for eight producers and radio presenters at Base FM. Her message was that it makes sense to pay more attention to the music they play in order to raise awareness of songs’ relevance. “If they want the music to have a positive impact to their listeners, they need to think about the message that each song brings with it,” Kazongominja points out. The idea is not simply to entertain listeners, but to involve them in public discourse.

The Milli* Summer School teaches participants to analyse various kinds of media messages critically. Relevant issues include identifying the source of information and paying attention to crucial facts, such as the names of persons, places and dates. These things can – and should – be checked. Participants, moreover, get the opportunity to produce media content that meets high professional standards. They later go on to train peers.

“After the training, I started really listening to the radio,” says Farah Judith Isaacs, a Summer School participant. She now also pays more attention to what kind of pictures she shares on social media because she has become “aware of implied messages”.

The Milli* Certificate Course trains participants from civic education, youth organisations and media outlets. They already know the basics of MIL and will become Milli* educators themselves. They must complete eight modules in a time period of two years, after which they are able to organise various kinds of MIL projects for different target groups.

The Certificate Course started its first module in April 2017 with a core group of 15 participants as part of a piloting phase. Olivia Ebas, one of the participants, works for the Omaheke Regional Library in Gobabis and is already making use of her new skills. “I started a media literacy club at my library for children between the ages 10 and 12,” she recounts. “I integrated the knowledge I had received to come up with content and training methods for this media club.”

Ebas attended the Summer School in 2016 and is now a member of the Milli* Board of Trustees. “This initiative has groomed my personal capabilities. I gained broad understanding of media literacy in Namibia and the world,” she says. Other Milli* alumni are similarly enthusiastic. Deonerica Kuhlmann, a trained facilitator, says that “Milli* is not only an initiative: it is a movement, a feeling, a FaMilli*”.

Julia Odoj is coordinator at the Media and Information Literacy Learning Initiative (Milli*). She lives in Windhoek, Namibia.
coordinator@milli.edu.na