The 2030 Agenda for Sustainable Development has been called “a contract for the future of the world”, for instance by Gerd Müller, Germany’s federal minister for economic cooperation and development. The document is not a contract in a binding legal sense, of course, and must be understood as non-binding “soft law”. However, it largely reflects and reinforces existing international law.

last contributed to D+C/E+Z in autumn of 2021. He is a professor of public law and director of the Institute of Development Research and Development Politics (IEE) at Ruhr University Bochum.

last contributed to D+C/E+Z in autumn of 2021. She heads the education desk at Germany’s Federal Ministry for Economic Cooperation and Development. 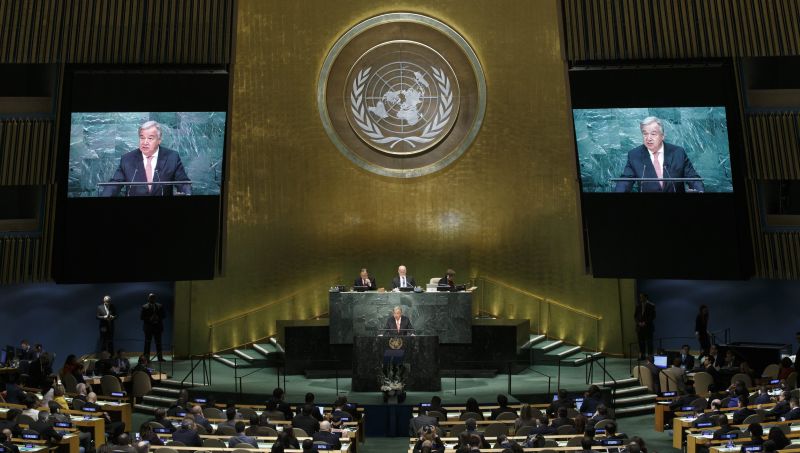 Lane/picture-alliance/dpa A top priority of António Guterres, the new UN Secretary-General, is to achieve the Sustainable Development Goals.

The UN General Assembly adopted the 2030 Agenda as a resolution. Unlike international treaties, resolutions are not legally binding. They constitute international soft law, so the question arises what kind of legal relevance a document like this actually has. Doubts are widespread. The truth, however, is that soft law norms often drive the development of international law. They help to lay the groundwork for codification and help to constitute new customary international law.

The political implication of soft law is perhaps even more important. Governments find it increasingly difficult to find the common ground to conclude new comprehensive agreements in view of complex challenges. Particularly at the multilateral level, it often makes sense to resort to “soft” governance tools in such cases. Soft law norms do not require parliamentary approval or the long years of application that customary law is based on. Accordingly, soft law better serves responding to international challenges fast than hard law does.

The application of soft law depends on acceptance rather than judicial enforcement. In the world of politics, this advantage should not be underestimated. High acceptance and peer pressure are important motivators, and respect for soft law is demonstrated by compliance. Reporting obligations and similar monitoring mechanisms can be made transparent and accessible to all.

Another reason why governments like soft law is that it allows them to agree on content that goes beyond a mere minimum consensus. No doubt, this made the resolution on the 2030 Agenda feasible. Given the complexity of international relations, it would have been an illusion to hope that all countries might conclude a legally binding agreement with similarly far-reaching content.

Despite the fact that the 2030 Agenda is not itself a legally binding international treaty, it nevertheless contains several references to international law and largely reinforces existing principles. The delegates of nation states at the UN have thus basically demanded that their nations comply with previously established norms. This was not unprecedented. The degree of attention the 2030 Agenda is getting, however, is great and the planned monitoring mechanisms mean that more transparency is being created than ever before.

Moreover, individual SDGs align closely with individual human rights. SDG 2.1., for instance, calls on countries to “end hunger and ensure access by all people, in particular the poor and people in vulnerable situations, including infants, to safe, nutritious and sufficient food all year round” by the year 2030. This goal basically reiterates the norms spelled out in Article 11 of the International Covenant on Economic, Social and Cultural Rights (ICESCR) and in the General Comment 12, which the UN Committee on Economic, Social and Cultural Rights (CESCR) adopted in order to specify this provision. The General Comment 15, moreover, elaborates the closely related right to water, and SDG 6 reflects the Comment’s requirements for implementing this right.

Last but not least, the right to social security matters very much. It is expressed in Article 9 of the ICESCR and is reiterated by the 2030 Agenda, particularly in the goal to “end poverty in all its forms everywhere” (SDG 1). To that end, SDG 1.3 calls on states to “implement nationally appropriate social protection systems and measures for all, including floors, and by 2030 achieve substantial coverage of the poor and the vulnerable”. This goal corresponds with the right to social security, which was also explicitly acknowledged in the Social Protection Floors Recommendation adopted by the International Labour Organization (ILO) a few years ago.

The complete list of overlaps between the SDGs and established human rights goes on much longer. The Danish Institute for Human Rights analysed the 2030 Agenda thoroughly and concluded that 156 of its 169 targets (more than 92 %) reflect human rights and basic labour standards. Apart from the ICESCR, relevant human rights are defined in the International Covenant on Civil and Political Rights (ICCPR) and a variety of more specific human-rights conventions, like the conventions on the rights of women and children.

Ensuring the social human rights, which, as discussed above, correspond closely to many SDGs, is the duty of the states where the rights holders live, whether they be the country’s citizens or foreigners. The 2030 Agenda recognises this fundamental obligation too. It states that “each country has primary responsibility for its own economic and social development”. However, the 2030 Agenda also stresses that the global development goals will not be achieved without revitalising and expanding the Global Partnership. One implication is that official development assistance (ODA) will continue to be a prominent part of the effort.

This implication is the intergovernmental aspect of the “contract for the future of the world”, and it likewise was preceded in international human-rights provisions. All of the above-mentioned General Comments refer to ICESCR Article 2 Paragraph 1, which obliges the state parties to take steps to realise the rights outlined. This can be done both “individually and through international assistance and co-operation, especially economic and technical”. The ICESCR duty to provide international aid is an expression of one of the three dimensions of extraterritorial state obligations. Even beyond their own borders, states have an international responsibility to strive towards ICESCR requirements being met.

Along with the UN charter (Article 56), the ICESCR (Article 2.1) is the primary hard-law basis for the Global Partnership. Soft law still determines – at least to a certain extent – the actual scope of the support obligations as well as the thematic and country-specific allocation of duties. Nonetheless, one may say that, at the latest due to the adoption of the 2030 Agenda, the obligation to provide ODA does not only meet ethical requirements, but is indeed deeply rooted in international law.

The comprehensive, transformational approach of the 2030 Agenda may well pave the way to local as well as global change. Every individual, group and institution should keep this in mind when reviewing whether governments are fulfilling the respective obligations – which is something they have every right to do so.

Markus Kaltenborn teaches at the law department and the Institute of Development Research and Development Politics (IEE) of Ruhr University Bochum.
markus.kaltenborn@ruhr-uni-bochum.de

This article expresses both authors’ personal views rather than official policy.