The price garment workers paid for Covid-19 in Bangladesh

Nazma Akter is a veteran of the labour movement in Bangladesh’s readymade garment industry. She told D+C/E+Z about how things have been developing in recent years.

last contributed to D+C/E+Z in spring of 2022 as the founder and President of the Sommilito Garments Sramik Federation – a labour union in Bangladesh that focuses on the needs and rights of readymade garment workers, particularly women. She is also the founder and Executive Director of the AWAJ Foundation, which works to increase women’s participation in decision making and empowerment at home and in the workplace. She became an ASHOKA fellow in 2019.

last contributed to D+C/E+Z in spring of 2022 as a freelance journalist. 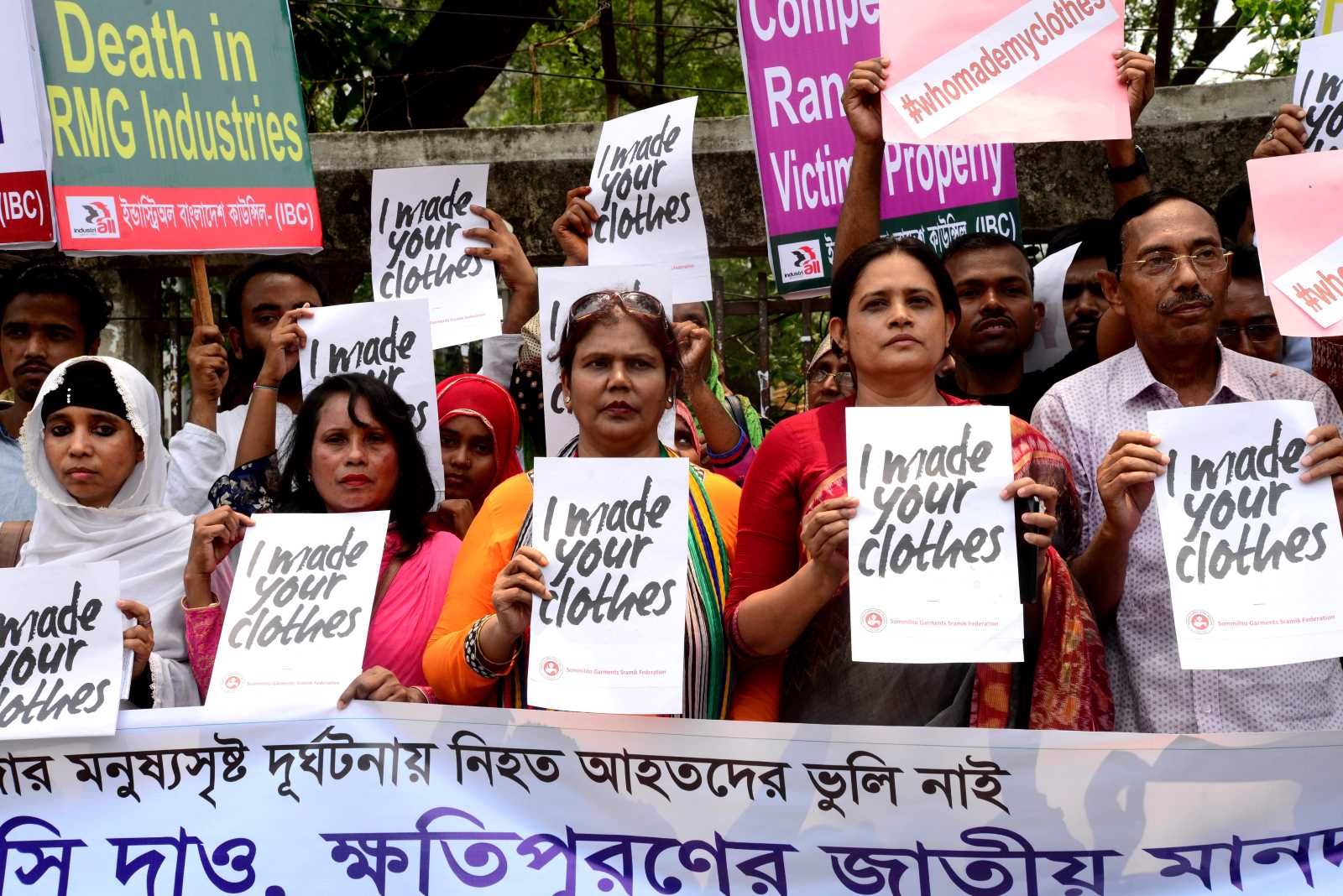 picture alliance / NurPhoto / STR Work-place safety has improved: Nazma Akter (in red) taking part in a rally in Dhaka in 2019, commemorating the Rana Plaza disaster of 2013.

What is the Covid-19 situation in Bangladesh at the moment?
We don’t bother with Covid. We have to work to survive. If a garment worker has a cold, a mild fever, or other flu symptoms, she keeps it to herself, takes paracetamol and goes to work. What else should she do? There is no sick leave, she needs the money and really does not have a choice.

How many garment workers got Covid? How many were hospitalised? How many died?
Those are good questions, but I have no answer. Some people were sick. But in general, if workers get Covid, it is hidden. I was also sick, but I did not go for a test. If the result is positive, what can I do? If it is negative, what difference does it make? That said, I do not know of any garment workers who died of Covid. You know, most garment workers are young, so their immunity is strong. Most people who died of Covid had asthma, heart problems or another chronic diseases.

Let’s go back to the beginning of the pandemic in early 2020. What were those first few months like?
Starting in March 2020, around $3 billion of garment orders were cancelled or paused. Payments were delayed. A countrywide lockdown began on 27 March, but the factories were excluded. This angered a lot of workers who insisted that they were human beings, too, and needed protection. There was a lot of confusion. The factories closed for a few days and then reopened. But many garment workers had returned to their families’ villages and could not come back to work because there was no public transportation. Many walked back to Dhaka over long distances. Prime Minister Sheikh Hasina Wajed announced a financial stimulus package worth the equivalent of almost €52 million for export-oriented industries, 85% of which went to the readymade garment sector. Nonetheless, employers did not pay March salaries on time. 300,000 people lost their jobs – including pregnant women and single mothers. There were protests, workers were beaten, arrested, and falsely charged. In April 2020, most people were back at work, but the manufacturers did not want to pay full salaries. In the end, most paid only 65%. By May, huge orders had come in and production was back to 100%. However, the international brands pushed hard for lower prices. Everybody was back at work, including overtime, and they were paid full salaries. But many people who had lost their jobs earned less when they came back. If they had earned 10,000 taka (the equivalent of slightly above €100) a month before the crisis, they were offered the same job back at 9500 taka (for Covid-19 impacts on garment workers in other countries, see Aenne Frankenberger on www.dandc.eu).

Your AWAJ Foundation is a labour organisation that operates at the grassroots level. It is running Women’s Cafés, not least to inform workers about their rights and options. Did those efforts continue?
Actually, we were closed for a few days when the factories were closed. But I and a few other people went to the office to help people who had been laid off, who had various problems. When the factories reopened, we were open again, too, in order to help people. Also, we did a lot of demonstrations, protests and interviews, globally and locally. There were meetings with the ministry, the garment manufacturers, different law enforcement agencies. The work continues.

How are the safety protocols in the factories?
The workers wear masks. Actually, that was the case even before the pandemic, because of the dust in the factories. The factories followed some safety guidelines at the beginning, but once 100% of the workforce was back there was no social distancing. In the factories, space is quite limited.

The monthly minimum wage in the RMG sector was raised from 5300 taka to 8000 taka at the end of 2018 after a long period of labour unrest, firing of workers and arrests. When do you expect wages to rise again?
According to the law, the government has to convene a new minimum wage board every five years. It can be done earlier than that, but the manufacturers do not want it to happen, even though they are running huge orders at the moment. It is very hard for workers to survive on 8000 taka. Everything is so expensive. One kilo of rice costs 70 taka; one kilo of beef is 620 taka. Housing eats up a large part of their salary. Then there is education and everything else. Many garment workers are supporting rural relatives who are even poorer. In countries that lack good social protection, extended families have to look after all members of the family, and garment workers play their part.

Sommilito Garments Sramik Federation, the labour union you founded and continue to head, has had impressive success in organising since 2013. Is that continuing today?
Oh yes. We now have over 70 affiliated unions in separate companies and thirteen collective bargaining agreements. Seven are pending. That is over 70,000 members. There are still a lot of issues, but we keep fighting to organise. We have many women leaders who are very strong.

In the past three decades, the industry has been diversifying. Some companies focus entirely on low prices, while others pay more attention to quality. Do these things make a difference in terms of working conditions? And what about managers’ willingness to cooperate with a labour union?
No, it makes no difference. Some of the modern firms have a better work environment in terms of drinking water, better ventilation, et cetera. But whether a factory is high tech or low tech, they all pay the same wages. And whether they allow freedom of association and collective bargaining depends very much on the individuals running the firm and on their human resources-department.

The Accord on Fire and Building Safety in Bangladesh and the Alliance for Bangladesh Worker Safety were formed after the Rana Plaza disaster in 2013 that killed more than 1,100 people, mostly female garment workers. These initiatives worked in Bangladesh from 2013 to 2018, inspected over 2500 factories, demanded safety improvements from most, and listed over 300 factories as unsafe – most of which subsequently shut down. How do you evaluate the work of these two initiatives?
I did not work with the Alliance, they did not support unions, but the Accord was legally binding and saved a lot of people’s lives. At least the factories now have fire and earthquake safety. Our workers are protected. That is important. Moreover, I got support from the Accord when a company’s management did not accept our unionisation efforts and with respect to forming safety committees and safety issues.

The Accord and the Alliance were replaced in 2018 by the Readymade Garments Sustainability Council. How do you evaluate the work of that Council since 2018?
This was a local initiative of local unions, manufacturers, and the brands, who took over the work of factory inspections. There was a question of accountability, so after 2019, we did a campaign for something more binding. We were scared that the achievements of the Accord would be lost. So we were very happy when the International Accord for Health and Safety in the Textile and Garment Industry was signed in 2021. It was signed by the brands as well as the trade-union associations UNI Global Union and IndustriALL Global Union. It is like the original Accord, but also extends to other countries. This is very good. It is legally binding, and the brands are being held accountable.

So workers are benefitting from international efforts to hold brand companies accountable for what happens at production sites?
That is a complicated question. But it is important to keep in mind that these important changes in worker safety did not happen until after Rana Plaza collapsed, after over a thousand people died, and thousands more were injured. The improvements were not the result of the decades of international efforts to hold brands accountable. It was the widespread international outrage over Rana Plaza that finally made significant change possible

Nazma Akter is the founder and President of the Sommilito Garments Sramik Federation – a labour union in Bangladesh that focuses on the needs and rights of readymade garment workers, particularly women. She is also the founder and Executive Director of the AWAJ Foundation, which works to increase women’s participation in decision making and empowerment at home and in the workplace. She became an ASHOKA fellow in 2019.
akter.n1973@gmail.com
Twitter: @NazmaAkter73