In touch with nature

The biodiversity of agriculture is being eroded internationally because of high-tech farming. The trend exacerbates environmental hazards and marginalises smallholder farmers who cannot afford expensive inputs. Organic agriculture with traditional landraces is a sustainable alternative. It is promoted by Sahaja Samrudha, a non-governmental farmers organisation in the south Indian state of Karnataka, as Anitha Reddy, the organisation’s communications director, elaborates.

contributed to D+C/E+Z in winter 2018/2019 as a trustee of the organic farmers collective Sahaja Samrudha and serves as its communications director. 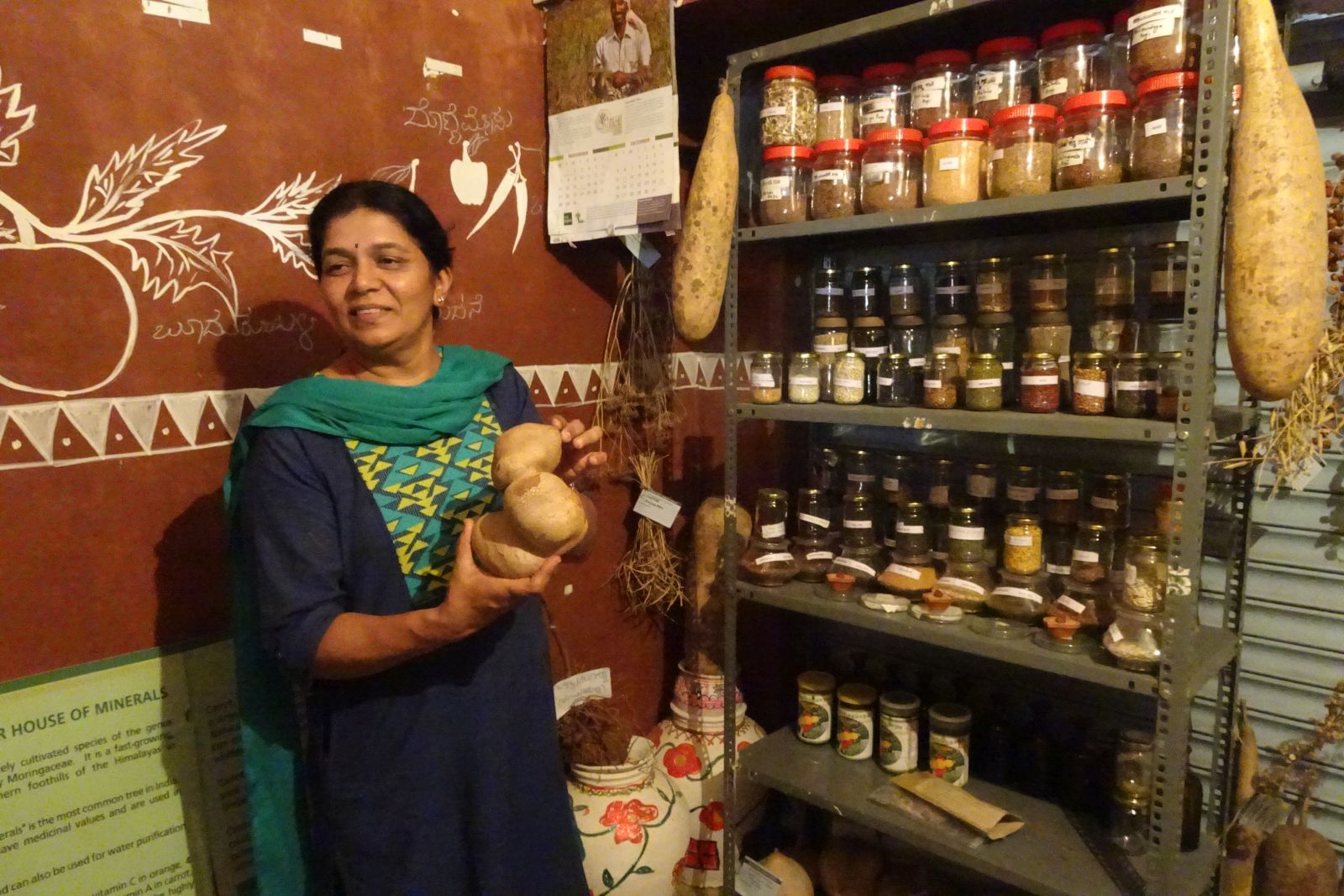 Why did your organisation create a community seed bank?
Seed banks are similar to banks or libraries. We borrow something and return it later. In our case, farmers borrow seeds and return the double quantity after a good harvest. In our region in the south Indian state of Karnataka, we created a community seed bank because the traditional seeds had disappeared. Farmers here were only using hybrid seeds. Cultivating them did not meet our objective of agro-biodiversity conservation. Hybrid seeds require a huge and costly input of chemical fertilisers, pesticides and irrigation water. Many smallholder farmers cannot afford this kind of capital-intensive cultivation. In our region, land holdings tend to be small, in the range of 0.5 to five acres. Water shortages are common. To make the most of such small farms, we wanted to revive the traditional crop diversity of landraces.

What are the advantages from the farmers’ perspective?

There are several advantages:

What makes traditional crops so valuable? The yields of hybrid varieties are higher.
Well, the green revolution focused completely on increasing productivity, relying on a very narrow genetic base and backing it up with synthetic inputs and increased quantities of water. This approach is not environmentally sustainable. Traditional crops, by contrast, are adapted to specific local conditions. They have the potential for high yields, and they have characteristics like pest resistance or drought resistance. They fit particular soils and climatic conditions. Historically, farmers understood well what seed variety to use in what circumstances. As a consequence, they hardly needed any inputs from beyond their region. In the past, India had a huge diversity of rice varieties with special characteristics that evolved in tune with the local environment. Some varieties suited dry lands, others suited coastal areas or deep water. Due to widespread mono-cropping, this diversity has been eroded in a dangerous way.

What is the danger?
The greatest risk is that, one day, the high-tech hybrids may fail. They are very homogenous and therefore quite vulnerable. If all fields are more or less the same, they can all be wiped out in a single crisis. In such a setting, the much greater diversity of landraces would make most farms more resilient. Moreover, the seed industry needs the genetical resources of the traditional varieties to breed the hybrids it sells. Its genetical resources are dwindling however, because fewer traditional varieties are being cultivated. The industry cannot safely rely on gene banks either. Scientists tell us that the natural environment keeps changing and landraces keep evolving, adopting to that change. Seeds that were stored for many years in a gene bank may therefore no longer be suitable, even in the places they are from. To stay viable, the traditional varieties must be cultivated. If, by contrast, we rely on hybrids, we’ll need ever more pesticides and water resources for irrigation, which we cannot afford for environmental reasons. And the brutal truth is that many smallholder famers cannot afford them for economic reasons anyway.

So they need an alternative.
Yes, they do. And that alternative has to be sustainable both in business and environmental terms. Melaku Worede, the eminent scholar and founder of Ethiopia’s gene bank, has stated: “Given the knowledge and skills within the traditional system, conservation of land races on peasant farms provides a valuable option for conserving crop diversity.” That is what we are doing.

How do traditional seeds and organic methods help smallholder farmers to cope with environmental change?
Our experience is that this approach addresses the most significant issues affecting rural communities: their social, economic and cultural rights. It is the farmers’ right to preserve their own seed for future planting seasons. Doing so liberates them from external forces. Our traditional agriculture dates back thousands of years. Traditional crops were bred meticulously over generations to fit the local circumstances. They can withstand climate-related vagaries, offering nutrition security to masses of the small and marginal farmers, including tribal communities.

Which organic farming methods do you consider especially important?
Crop rotation matters: it is important not to grow the same crop on the same plot year after year. Cultivating different plants at different times serves several purposes, including preserving the productive capacity of the soil, minimising pests and diseases and managing nutrient requirements. As a result, yields are maximised. Mixed cropping is useful too: farmers sow several crops at the same time. That way, they can maximise land use and reduce the economic risks associated with a single crop failing. As the saying goes: don’t put all eggs in one basket. Mixed cropping, moreover, boosts biodiversity in the sense of attracting a variety of beneficial and predatory insects, which in turn minimise pests. Indeed, what happens on a farm has an impact on the environment of that farm, so more diverse farms ensure greater overall environmental diversity.

What kind of seeds does your seed bank contain?
Our repository includes more than 800 varieties of rice, 120 of millet, 32 of wheat, 56 of eggplant and 52 of pulses. We also have many other vegetable and fruit varieties from 20 districts of Karnataka, as well as 23 different varieties of Indian cotton. Sahaja Samrudha is working with more than 6,300 farmers who breed and save seeds. We have 32 local seed bank subsidiaries, strengthening the local supply system. Moreover, we are running collaborative research programmes with academic institutions, thus according the farmers their true status as scientists, conservationists, breeders and innovators. They really play key roles in improving genetic resources at the local level – and they always have done so.

Do you reach out to the wider public?
Yes, we do our best to popularise the traditional varieties and raise awareness for their nutritional and medicinal values. We organise festivals that focus on biodiversity in general as well as on specific cultivars like rice and millet. We bring producers and consumers together at seed trade fairs in towns and cities. Small farmers earn money by selling seeds, and the consumers take pride in preserving the vanishing species in their backyards or even rooftop gardens.

What challenges do you face?
If you go to any part of Karnataka or anywhere else in India, most organic farmers will tell you that production is not a problem, but marketing is. So we set up a firm that specialises in marketing in 2010. It is the Sahaja Samrudha Organic Producer Company Limited (SSOPCL) and uses the brand “Sahaja Organics”. It was a struggle to get it started, but now it is operating well. The concept is unique. It is wholly owned by organic producers who must be primary producers committed to protecting the environment and providing healthy food of high quality. SSOPCL only distributes certified organic products, and only certified organic farmers are eligible for membership. Our network includes about 2,800 individual organic farmers and 20 organic producer groups in Karnataka and the neighbouring Indian states of Tamil Nadu, Kerala and Andhra Pradesh. The company has become the largest wholesaler of organic rice, pulses and millets in Karnataka. The prices it pays the farmers are up to 20 % above the conventional market price, but at the same time, it provides consumers with high-quality products and reasonable prices. It broke even in 2013, and the annual turnover amounted to the equivalent of about $ 1 million. Our goal is to be the quality leader in the organic produce industry, and customer satisfaction is our top priority. Ultimately, we serve a triple purpose: ensuring rural livelihoods, marketing healthy food and protecting the environment.

Anitha Reddy is a trustee of the organic farmers collective Sahaja Samrudha and serves as its communications director.
reddyanitha88@gmail.com
https://www.sahajasamrudha.org/