Rahul Gandhi, a former president of the Congress Party, is walking across the country. The idea is to show humility, engage the public and revitalise a sense of national unity in response to the aggressive Hindu-supremacism of Prime Minister Narendra Modi. Krupa Ge, a Chennai-based journalist, went to see the campaign in its early days and was impressed. This is the first part of her account. 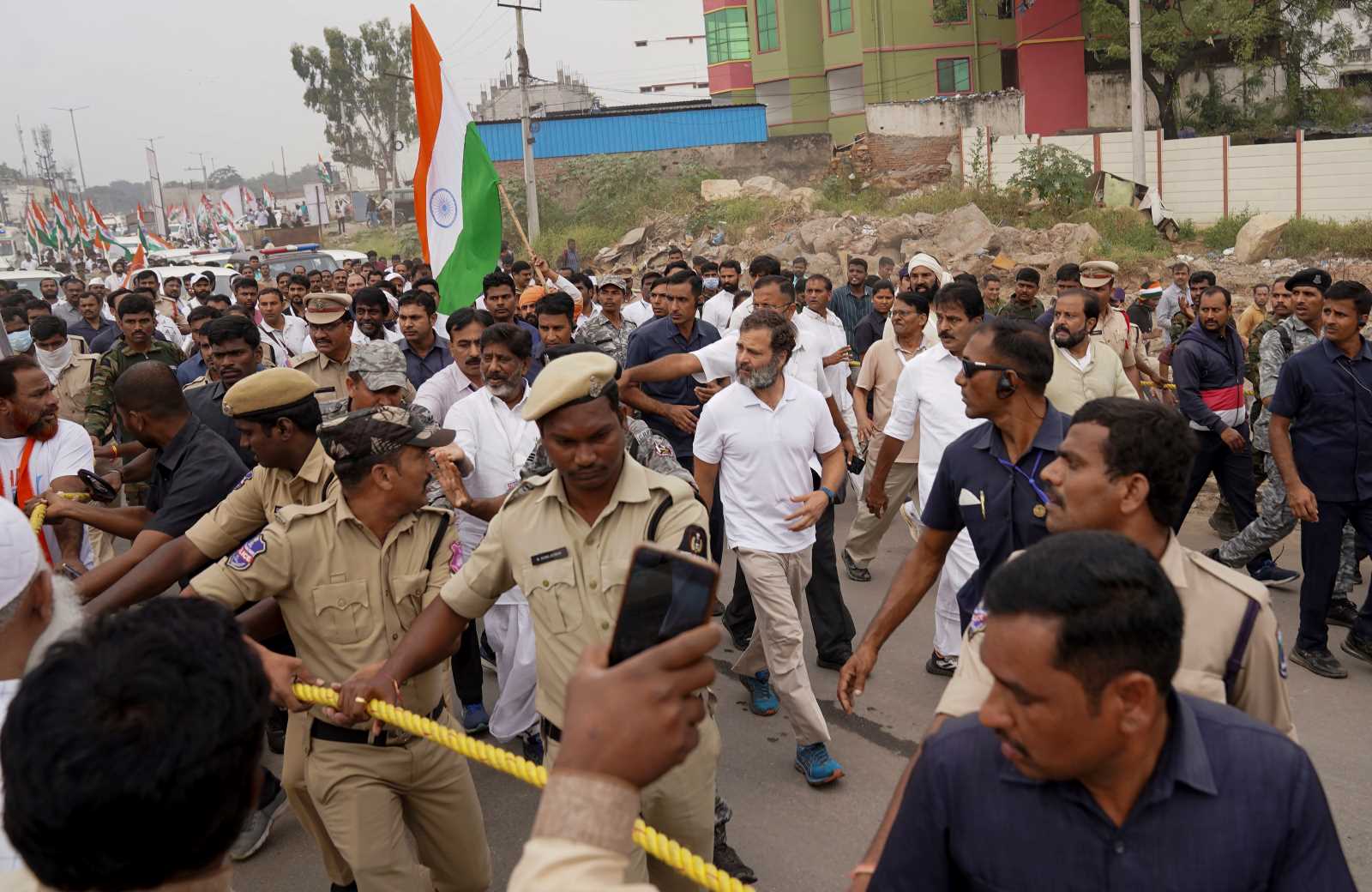 In India today, where anger is the primary language and currency in politics, it is not at all surprising that thugs have a free run on the streets. Men brandishing hate in their speeches, swords and sticks in their hands, men are fomenting hate. The mobs are having the time of their lives, even as they shout the rest of us down. They are everywhere, not just on the streets. On TV and the internet, sometimes even in our drawing rooms, Hindutva nationalism and its hatred for other religions has become an all-consuming project in India (also see Afra Khanum Sherwani on www.dandc.eu).

The line between the mob and the state has also long been erased too. I shut down my Facebook account and stopped using Twitter some time ago. The two social-media giants have allowed hate speech against India’s minorities to thrive unabashedly. Even as I write this, television anchors in Indian news channels are cheering policemen on for publicly flogging Muslims, Taliban style. They demand “instant justice” for crimes for which they have no proof, but which they blame on members of India’s many minorities, and especially Muslims.

Bulldozers all too often demolish minority property in front of television cameras – and it would be foolish to expect the police to protect innocent victims. Such state-tolerated and sometimes state-sponsored lawlessness is Modi’s New India.

I long for something different. To promote peace and togetherness,  Rahul Gandhi, the former president of the Indian National Congress, the main opposition party, started a long walk across the country in September. He is accompanied by about 100 supporters. They are welcomed by crowds, wherever they arrive.

When I first read about it, I wanted to see for myself what that India might feel like. What might it be like to go to a part of your country that you have not been to before? Getting to know people of different languages, different cultures and different cuisines? Travelling not as a tourist, but as a curious compatriot? Walking the roads and streets of India in the presence of a politician? Attempting to protect the soul of your nation? It feels quaint, even unrealistic – but it does inspire hope.

Rahul Gandhi, against whom much of the ruling party BJP propaganda machinery has directed its hate, chose the street not to shout his opponents down, but to reach out to people. The full truth is that every other avenue of reaching out to them has been shut for him, as it has been for all political opposition today.

He resigned from his party’s presidentship after losing the general elections in 2019. After dominating Indian politics for decades after independence, the party’s future now seems dark, and not only those who endorse Hindu-supremacism see it in decline. As the son, grandson and great-grandson of former prime ministers, Rahul Gandhi is nonetheless a person of great symbolical relevance.

The long march across the country is called the “Bharat Jodo Yatra”. In Hindi, “Bharat” means India, “Jodo” Unite and “Yatra” Journey. The campaign brims with symbolism.

A padyatra (travel by foot) holds a lot of meaning in India’s political language. Many religions, not only in South Asia, are familiar with a pilgrimage on foot to show penance and humility. The march resonates with Indians at large. A politician’s padyatra reminds people that they are supposed to be the ultimate authority in a democracy. The constitution makes them the lords of this land.

Mahatma Gandhi showed India and the British, the power of a padyatra. His Dandi March in defiance of the colonial salt monopoly, has a place of prominence in world history. Along with many followers, Gandhi made salt and walked 380 kilometres.

Rahul Gandhi (no relation) is inspired by the freedom fighter’s example, but his Bharat Jodo Yatra is very much a 21st century event. It is livestreamed and instagrammable. Pictures, neatly edited videos and messages are posted online, and some even go viral.

Since the start in September, Rahul and his followers have covered over a thousand kilometres. In contemporary politics, no other politician has live streamed themselves for this long in India.

It was still early days when I decided to go. All I had heard was that the yatra covered 25 kilometres a day on foot. About 12 to13 kilometres in the morning and the rest in the evening. Delhi-centric Indian national media had done its best to ignore the event. Even those in the media who oppose Hindu-supremacism were conspicuously silent.

I joined the yatra one morning in Karunagappally in Kerala, a southern state. The highway was decorated for the demonstration. As one grew closer to the venue, massive installations adorned street corners. There was even a mini set of Delhi’s Red Fort (from where the prime minister of India delivers the annual Independence Day speech). There were party flags, huge hoardings and cut-outs.

One could see how much this event meant to local activists of the Congress, which certainly did not look like a dying political party. On the streets wherever the yatra went, the revival of the opposition felt real. The sound of drums, dancers, a brass band, the festive buzz…  This was very much like the celebrations politicians organise after an election victory.

Music composed especially for the event was blasting from speakers mounted on a fully decorated jeep. The tune was catchy, and the lyrics were in Malayalam, the regional language. The song had actually been written for the event and celebrated it. For days after I returned from the journey, I found myself humming it.

I climbed up the stairs of a mosque and waited for the yatra to pass by. Everywhere I looked, there were crowds. There was barely any space in the middle of the road for Gandhi’s security cordon.

The government has ample reason to worry about potential threats to his life, and for good reason. His father, Rajiv Gandhi, and his grandmother Indira Gandhi, were both assassinated. Indira was killed while she was serving as prime minister, and Rajiv while he was campaigning to regain that office after having lost it in a previous election.

There were people in front of me, behind me and next to me. There were people all around the mosque. The air of anticipation was palpable. Then suddenly the yatra came to us. Gandhi walked quite fast, but stopped here and there. He turned to where we were standing, smiled and waved.

The shy, old woman next to me was very pleased. She had shouted to get his attention. In the next part of this story, I will elaborate what I experienced joining the march for a day.